A CRIME AGAINST HUMANITY 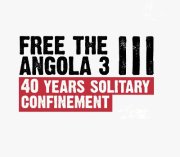 I think we all know that terror is routed in the foundation, and dare I say, “the History of our country”. African Americans, and others, are well aware of groups like the KKK and some may government agencies that are known only by alphabets that use these tactics against some Americans. Surely, it’s been used on people around the world in the name of freedom.

I am only suggesting that there are some crimes committed under the guise of law that are beyond the scope of justice. Case in point, the Angola Three which I am sure you have never heard of. This is a hideous a case in Louisiana’s prison system that hold the record for the longest incarceration of a human being placed in solitary confinement.

It’s been over 40 years since the day Herman Wallace and Albert Woodfox have been held in solitary confinement in Louisiana. The state says they were guilty of murdering a guard at Angola Prison, but Wallace, Woodfox and their network of supporters say they were framed for their political activism as members of the Black Panthers. Since April 17, 1972 or nearly 14,650 days Woodfox and Wallace has been held in solitary confinement living in a six by nine foot prison cell only being allowed out for an hour a day. This is without question cruel and unusual punishment.

These two men founded the Angola chapter of the Black Panther Party in 1971. A third prisoner, Robert King, joined them a year later. The three campaigned for better working conditions and racial solidarity between inmates, as well as an end to rape and sexual slavery. Today, two of the three men remain in this condition that Amnesty International continues to support their effort for fair and reasonable justice.

Amnesty USA says it will deliver a petition to Louisiana Gov. Bobby Jindal that bears the signatures of tens of thousands of people from 125 countries asking for his intervention. They are asking "the state of Louisiana and we want the world to know that we are still focusing on this case.

This is a total violation of human rights and civil rights," King says. "And it is ongoing." Robert King was released in 2001 when his conviction was overturned and he pleaded guilty to a lesser offense. I am not saying that a crime was not committed, but does this punishment fit the crime.

And that’s my Thought Provoking Perspective…

Info about the case: http://angola3.org/thecase.aspx