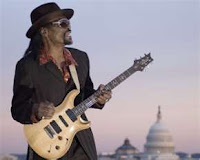 The Nation's Capital mourns the passing of Washington DC’s favorite son Chuck Brown known as the “Godfather of Go-Go”. Details are a bit scant at this time, but it has been confirmed that Chuck whose been hospitalized with pneumonia for the past two months, leading to cancellation of shows and other public appearances. Rumors swirled around town that Brown had passed earlier in the year, although his family and management debunked the claims.

Chuck made a name for himself in the 70s with the smash hit “Bustin' Loose” and effectively birthing a new genre in Go-Go music. Largely a native to the Washington Metro area, Go-Go music is a byproduct of funk and soul backed by African rhythms, call-and-response chants and dances tailored made for the music. Brown was infamous for his "Wind Me Up, Chuck" routine and his hefty baritone voice was both melodic and confident.

Chuck Brown was a favorite of Washingtonians, enjoying popularity in the city and abroad that continued on for decades. The Godfather is considered by many to be Washington musical royalty, and his loss leaves behind a legacy of hits and thousands of mourning fans who grew up with his music.

The 75-year-old musician’s is said to have learned music in his early years in prison where the performer, singer, guitarist and songwriter developed his commanding brand of funk in the mid-1970s to compete with the dominance of disco. Like a DJ blending records, Mr. Brown used nonstop percussion to stitch songs together and keep the crowd on the dance floor, resulting in marathon performances that went deep into the night. Mr. Brown said the style got its name because “the music just goes and goes.”

In addition to being go-go’s principal architect, Mr. Brown remained the genre’s most charismatic figure. On stage, his spirited call-and-response routines became a hallmark of the music, reinforcing a sense of community that allowed the scene to thrive. As go-go became a point of pride for black Washingtonians, Mr. Brown became one of the city’s most recognizable figures.

“No single type of music has been more identified with Washington than go-go, and no one has loomed larger within it as Chuck Brown,” former Washington Post pop music critic Richard Harrington wrote in 2001.
Mr. Brown’s creation, however, failed to have the same impact outside of the Beltway. The birth of go-go doubled as the high-water mark of Mr. Brown’s national career. With his group the Soul Searchers, his signature hit “Bustin’ Loose” not only minted the go-go sound, it spent four weeks atop the R&B singles chart in 1978.

“Bustin’ Loose” was “the one record I had so much confidence in,” Mr. Brown told The Post in 2001. “I messed with it for two years, wrote a hundred lines of lyrics and only ended up using two lines. . . . It was the only time in my career that I felt like it’s going to be a hit.”

It was Mr. Brown’s biggest single, but throughout the 1980s “We Need Some Money,” “Go-Go Swing” and “Run Joe” became local anthems, reinforced by radio support and the grueling performance schedule that put Mr. Brown on area stages six nights a week. While rap music exploded across the country, go-go dominated young black Washington, with groups including Trouble Funk, Rare Essence and Experience Unlimited (also known as E.U.) following in Mr. Brown’s footsteps.

Mr. Brown performed less frequently in his final years but still took the stage regularly. He would often comment on his golden years in rhyme. “I’m not retired because I’m not tired. I’m still getting hired and I’m still inspired,” he said in 2006. “As long as I can walk up on that stage, I want to make people happy. I want to make people dance.”

"Wind Me Up, Chuck" and may your soul Rest in Peace. And that’s my Thought Provoking Perspective…

http://johntwills.com
Posted by Unknown at 6:32 PM