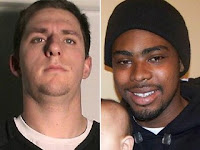 Today was one of those days where I awoke to hear the disturbing news concerning the outcome of a court case in Oakland California involving the verdict of a police shooting of an unarmed man, which from my perspective was murder. If memory serves me correctly Moses came off of Mount Sinai with two tablets given to him by God that said, “thou shall not kill”, which means murdering a human being is a capital sin. I wonder if there was a subtext on the tablet that says unless you are the police because we see repeated cases where the judicial system places the people who took an oath to protect and serve above the law.

This case involved an “incident” where a former BART Officer, Johannes Mehserle, on the morning of Jan. 1, 2009, fired a fatal shot into the back of Oscar Grant III while he was on the ground being restrained by several Officers. Mehserle is white, Grant was black. The Officers excuse to justify his action was that he was “reaching for his taser”, which by the way happened to be on the opposite side of his body. So the jury was required to second-guess whether the transit-system cop intended to reach for his gun or his Taser.

In this case like many others, i.e., Rodney King that was among the most racially polarizing cases in California where four Los Angeles officers were acquitted, was captured on videotape. In fact, there were at least five videotapes by different bystanders of this shooting incident. Now, in the mind of a reasonable person and what I saw, it looked like murder. Yet, the verdict that was rendered by the jury was clearly different to that opinion. The jury said, felt, believed, and viewed this crime from what they saw “through evidence” as a case that showed an act of involuntary manslaughter and an unintentional accident due to criminal negligence.

Apparently the jurors didn't believe Mehserle acted without regard for Grant's life nor did they believe he was provoked and acted in the heat of passion. Instead, they found that he acted negligently, but without malice resulting in a guilty verdict of involuntary manslaughter, which carries a 2 – 4 year jail term or less depending upon “time served”.

It was a quick verdict. The case was given to the jury on Friday. Monday was a holiday. A juror was sick Tuesday. And then on Wednesday, one juror was replaced because of a previously scheduled vacation, forcing the jury to restart deliberations with a new member. Talks that day were cut short because of another juror's medical appointment. So Thursday was the first time jurors had the opportunity to deliberate for a full day. But by mid-afternoon, they had reached a verdict.

It was reported that this was never a clear-cut case in spite of the overwhelming video evidence we saw “with our lying eyes” over and over again. These same voices said there's an important point to remember here: Reasonable minds could have looked at the evidence from the three-week trial and come to different conclusions. Therefore, with respect for the legal process and respecting the jurors' verdict that might not be perfect in the minds of many, it was a rational outcome concerning a reasoned process. In other words the word ‘guilty’ is not expected to be heard involving cops.

The jury’s conviction on a lesser charge than murder raised concerns of a repeat of the unrest in Oakland that followed in the initial days after the shooting. There were scattered incidents of violence reported Thursday night and unfortunately those fears have been realized. Police arrested at least 83 people in Oakland Thursday night for failing to disperse, resisting arrest, burglary, vandalism and assaulting a police officer. Protesters defiled several downtown smashing windows, sporadic looting, busted doorways and some newly scrawled walls with graffiti.

Let me be clear, laws are necessary as it relates to maintaining civilization and it is required to have law enforcement to insure order or as they say protect and serve. However, every police shooting, particularly those of this nature, is not justified and deaths like Grant's must not be forgotten or tolerated because if history is any indication there are sure to be more in the future.

Let’s not resign ourselves to accept that there is an unwritten code of unfairness and wrong that is engrained within the system of justice that cannot be addressed and corrected. Maybe the comedic genius Richard Pryor was right when he famously said; as it relates to JUSTICE what we get is JUST-US.