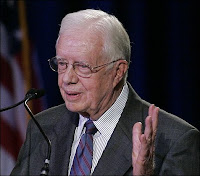 I would like to offer tremendous praise and much respect to the 39th President of the United States. Everyone knows that there is an elephant in the room, which is not just a reference to the Grand Ol Party and those who call themselves conservative. This group of largely white men, or at least they are the face of it, are the instigators of this vitriolic venom being castigated overtly. Maybe I made an error when I said LARGELY because there are a few people associated with this group that remind me of my uncle whose name is Tom for not seeing what is obviously present, but I will digress.

What I want to say via this writing is that I applaud President Carter for his outward expression of truth and for saying what most pretend does not exist. The former president, a civil rights champion raised in the South, said Tuesday that “an overwhelming portion of the intensely demonstrated animosity toward President Barack Obama is based on the fact that he is a black man.” He went on to say, “I live in the South, and I've seen the South come a long way, and I've seen the rest of the country that shared the South's attitude toward minority groups at that time, particularly African Americans,” Carter said in an interview with Brian Williams of NBC News. "And that racism inclination still exists. And I think it's bubbled up to the surface because of the belief among many white people, not just in the South but around the country, that African Americans are not qualified to lead this great country. It's an abominable circumstance, and it grieves me and concerns me very deeply.”

The most profound and truthful part of the statement, I thought, was this: “There is an inherent feeling among many in this country that an African American should not be president.” What the 39th President said is what few have dared to say out loud, or even admit. Therefore, I say “Thank you Mr. President”.

In response to this the Republican National Committee Chairman called the comments “a pathetic distraction by Democrats to shift attention away from the president's wildly unpopular government-run health-care plan. …I've had a problem with this post-racial attitude that some in the Obama campaign, now in the administration, have tried to -- to hoist out there,” Mr. Steele said. WOW!!! The possibility of racism is never raised by conservatives, despite polls showing that frightening numbers of conservatives believe that President Obama was born in Kenya or worst yet think he is the "anti-Christ." Again, WOW!!!

When these folks make statements like President Obama “should be buried with Senator Kennedy,” or they bring guns to his rallies, call him all kinds of names, and use vitriolic language propagated on the airwaves. We have a problem and a very dangerous problem because we have seen how this type of speech emboldens people to do horrible things. If this is not racism being directed toward the president, who happens to be black, it is surely HATE. It is time to rally and unite behind good – not evil.

Barack Obama is our President and I believed him when he said, “YES WE CAN”. This was whispered by slaves and abolitionists as they blazed a trail toward freedom through the darkest of nights. It was the call of workers who organized; women who reached for the ballot; a President who chose the moon as our new frontier; and a King who took us to the mountaintop and pointed the way to the Promised Land.

I say again, YES WE CAN…

JUST A SEASON
Posted by Unknown at 7:07 PM