The Huge Shoulders Of Hal Jackson 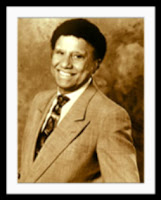 It’s hard to imagine that not too long ago, and even today, there were and are still firsts with respect to the first Colored, Negro, Black, or African American to do this or that. The amazing radio personality Hal Jackson did it before it was believed possible.

He broke through the color wall on the radio in Washington in the 1930s, pushed the District’s major clothing retailers to let blacks into their dressing rooms and restrooms in the ’40s and became the first black host on a national broadcast network in the 50s – and I for one honor him.

Through most of the second half of the last century, many black New Yorkers grew up knowing Mr. Jackson as a radio DJ whose smiling face appeared on billboards across the city. Decades before that, Mr. Jackson was a household name in black Washington, which is what impressed me about him. Being from the area I remember the broadcasting giant and civil rights pioneer who repeatedly found ways to smash through barriers.

In the mid-1930s, he won free entry into Griffith Stadium as a volunteer to clear trash during Washington Senators games where no blacks were allowed to enter the press box. The Negro League’s Homestead Grays also played there where Mr. Jackson eventually was allowed to narrate some Gray’s games to the crowd in the ballpark. At the time, Negro League games were not broadcast on the radio in Washington.

He wrote a proposal to present “The Bronze Review,” a program of entertainment, interviews and news, but Mr. Jackson said nothing about having a black host. The station’s white executives had no idea that “bronze” was then the classy term for “negro” in Washington’s black community.

On his debut night, Mr. Jackson arrived at WINX with his first guest, Mary McLeod Bethune, President Franklin Roosevelt’s director of Negro affairs. They waited outside until 15 minutes before airtime to minimize the chance that station managers might bar them from the air. The show went on, devoted to a discussion about Washington’s blighted black neighborhoods. “The Bronze Review,” hosted guests such as first lady Eleanor Roosevelt, entertainer Lena Horne and Rep. Adam Clayton Powell Jr. (D-N.Y.) becoming a nightly must-listen show for black Washington.

By the mid-1940s, Mr. Jackson was doing sports and his late-night talk show on WINX and spinning “race records,” as songs by black artists were then known, during morning drive time on WOOK in Silver Spring. He performed commercials in rhyme and urged listeners to join his Good Deed Club, collecting toys and books for charities.

In 1949, Mr. Jackson by then was the host of a television variety show broadcast from the Howard Theatre. He organized a picket on Connecticut Avenue, then the city’s most prestigious shopping boulevard, against retailers who sold to black customers but refused to let them use the dressing rooms or restrooms. The protest worked: Stores changed their policies.

Within a couple of years, Mr. Jackson was again on the air virtually around the clock at white- and black-owned stations. By the late 1950s, Mr. Jackson had added a children’s TV show that featured New York’s first integrated studio audience. It was round this time that Irving Rosenthal, the owner of Palisades Amusement Park, asked Mr. Jackson to host weekend concerts at the theme park and the DJ’s face was plastered on billboards around New York.

Mr. Jackson worked as a popular DJ up and down the east coast; Washington, New York, a midday show at WANN in Annapolis and an evening gig on Baltimore’s WSID as well as owning several radio stations. In 1995, Mr. Jackson was the first black elected to the Radio Hall of Fame. Every black or minority working on radio or in television owe this man a debut of gratitude. Or maybe I’ll say it this way – “They stand on the shoulders of this Giant”.

After paying homage, and much deserved, I will use Mr. Jackson’s nightly sign-off reflected his peripatetic life: “I’ve got to pack the shellac and hit the track, but I’ll be back.” And that’s my Thought Provoking Perspective…