The Godfather Has Lost His Way 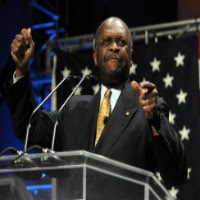 Some subjects produce raw emotions be it pro or con and I this post may well be received by some as negative. Nonetheless, I felt the need to say something. I was listening to an old speech of Brotha Malcolm the other day. It was called “Friends and Enemies”.

Later that evening, while watching the evening news they showed a clip of the GOP’s New Negro and straight talking contender for president. He proudly said, "If you see 100 out of 1000 black faces in the audience, that's par for the course… What lowers that is economics." Most of his comments that I have heard are as bad as the rest of the Klan - Obama this, Obama that – well you know how it goes.

The Godfather was asked about his position as the most prominent African American in the Republican Party these days; he said, he refuses to "stay on the Democratic plantation like he's supposed to" and he refuses to drink the liberal Kool-Aid. When asked why more African Americans haven't joined him at tea party rallies and conservative conventions, the millionaire ex-CEO has a shocking explanation; “African Americans are too poor to tea party.”

Population demographics was another answer he gave and what he called Democratic "demagoguing" of the Republican Party and conservatism. "If you look at the typical income of a black family of four it's going to be lower than a non-black or white family of four," he explained. "Generally speaking on average, white families are much more economically prosperous than black families." No kidding!

First, if I had the chance, I would ask if the Godfather if he could remember how big a fool they made of “Our man Steel” the so-called and one-time face of GOP. As Malcolm said in his speech, “They will find a Negro to do their bidding”. We’ve seen the likes of Steel, West, Connolly, Thomas, and Keys come out of the woodwork waving the Constitution singing God Bless America. The thousands of our ancestors who toiled in the fields as slaves would refer to people of this mindset as “House Negro’s”. I’d like to suggest, we be much harsher – in my view. I guess it just tells us that democracy isn’t pretty. Ok, I digress!

Back to the Godfather, he said, that he doesn’t appreciate the idea of being labeled an “African American.” During an interview with Bloomberg, he added that he prefers to be called an “American,” stating that the word “African” on the front of his racial identity limits him and inaccurately describes who he is. He went on to say, “I don’t like people trying to label me. African-American is socially acceptable for some people, but I am not some people.”

Sure there are those who agree with him, as there is little reason for most black people to feel any connection to the continent of Africa. Gerren Gaynor, a writer for NewsOne.com, wrote “African-Americans/Blacks/Negroes have no true sense of identity. If you’re African-American, you’re more than likely far removed from the African continent and culture… there’s absolutely nothing wrong with omitting “African” from our nationality”. Hmmm!

However, that is not the same as forgetting that you are what you see when you look in the mirror. More importantly, what they see. So for me I take issue with the Godfather’s remarks. I will go further and just call it what it is “Ridiculous”. Believing that it is somehow inaccurate or unpatriotic for a person to call himself an ‘African-American’ rather than just an ‘American’ is absurd, and frankly how dare he fix his mouth to say such a thing.

“Cain’s remarks about the pitfalls of being called an “African American” remind us of the kind of assimilation expected by those who somehow feel that blackness is a liability. The truth is that our dark skin is reflective of our African roots, and not knowing anything about Africa is no excuse to deny ourselves access to thousands of years of storied and valuable culture. White Supremacy 101 tells us that we can be successful in spite of being black, rather than finding success because we are black.”

For some reason, this guy seems to think by connecting himself with those who enslaved his forefathers; he is somehow attached to the heritage of his blue eyed brothers and sisters. But the reality is that when he denies his genealogical roots, he is disrespecting those who carried the blood that runs through his veins. Personally, I’d be ashamed to have a great grandchild who decided to negate my connection to him simply because he knows nothing about our struggle.

At a time when we have the first black president, Godfather your position should be one of unity not descent. Frankly, I think he would dangerous for America as president and certainly dangerous for us. Godfather there is nothing wrong with appeasing your Tea Party Klan, if that is your wish. However, I hope you realize that in the eyes of many who look like you; you are being reduced to a political cartoon character. Finally, the commentary you direct at our president does not demonstrate much dignity nor pride in who you are.
I want to close, for the first time, with a pray; God in your name condemn the resurrection of these dormant seeds that harm our lives casting descent in the world you created in Jesus name. Amen!

Mr. Cain you are no Barack Obama!
And that’s my Thought Provoking Perspective.

I can't stand Herman Cain either. We need to stop letting these business men run for office.

Thought provoking indeed. Perhaps I am not up to the minute with this particular story. However, my personal view is people are people and they show who they are based on their character and the color of their skin. I think this is an old argument or topic. I believe it is time for people to be people and race shouldn't have any pull one way or another. I understand that this is still a heated topic with some, however, I have settled in my mind to judge people on the basis of their character and other upstanding categories and leave race out of it entirely.

I am your newest follower :)

I really enjoyed reading your blogs! Your book will have to be a "MUST READ" for me.

One of my most favorite quotes from an all time movie....

"Father you see yourself as a colored man, where I see myself as just a MAN." ~ Sidney Poiter in Guess Who Is Coming To Dinner.

May God Bless you and yours.