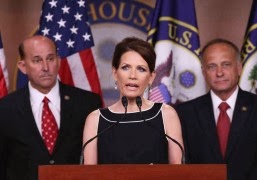 While the GOP crazies cite their inability or desire to halt the government shutdown coupled with impending default of the nation; all of which is by their design. It is being reported that my favorite crazy Congresswoman Michele Bachmann introduced today a resolution to impeach President Obama this morning claiming his inability to halt the federal government shutdown she says this makes the president unfit for office and referring the matter to the House Judiciary Committee. Senior aides close to judiciary chairman Bob Goodlatte say hearings will begin Thursday.

With all the drama these nuts have created they want to do something like this. Even the most dangerous nut of the all and probably the main culprit in all of this Crazy Cruz admits, "We probably won't be successful." CC is one of the few Republicans in the Senate supporting the impeachment process also says, "But we have to try. This guy is worse than Hitler. We have to do something." WORST THAN HITLER! I would argue that this is like the pot calling the kittle black.

The terrorist acts of treason, which is no different than secession designed to destroy the nation. They talk about the “American People” but most Americans find their actions reckless and irresponsible that I liken to the actions of their forefathers one-hundred fifty years ago. You know that little thing called the Civil War motivated by slavery. Is this the same thing when this time it’s also about color; the black man who occupies the white house?

The Congresswoman went on to say:

"I think it's high time President Obama be held accountable for his crimes," explains Bachmann. "For two weeks now, vital government services have been disrupted, federal workers have gone without pay and national memorials have been closed, all because of the president's refusal to negotiate over Obamacare.

"This isn't just poor leadership. The Obama administration is corrupt to the core. The scandals surrounding the IRS, Benghazi, the Fast and the Furious (sic) and Solyndra have shown us this cabal will do anything to stay in power.

"But in shutting down the government President Obama has committed economic treason against the United States of America, and he must be removed before it's too late. The Constitution provides us the mechanism of impeachment. It's time to end this dictatorial regime and return the presidency back to the American people."

Bat Shit Crazy is an insult to bats! And that’s my thought provoking perspective…