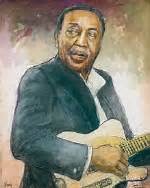 What we know today as Rock and Roll was really the creation of a genius from the Mississippi Delta named McKinley Morganfield better known to the world as Muddy Waters. This bluesman also known as the "father of the modern Chicago Blues” has been credited for being the major inspiration behind the British blues explosion of the 1960s. Muddy’s career resulted in his being ranked No. 17 in Rolling Stone magazine's list of the 100 Greatest Artists of All Time.

Recent research has uncovered a 1955 interview in the Chicago Defender where he claimed 1915 as his year of birth, which he continued to use in interviews from that point onward. His grandmother is credited with giving the boy she raised the nickname "Muddy" at an early age because he loved to play in the muddy water of nearby Deer Creek. Muddy later changed it to "Muddy Waters". A testament to his monumental achievements the shack where Muddy lived in his youth on Stovall Plantation is now located at the Delta Blues Museum in Clarksdale, Mississippi.

Although Muddy started out on harmonica by age seventeen he was playing the guitar at parties, emulating two other blues artists who were extremely popular in the south, Son House and Robert Johnson. However, Muddy would go on to surpass them in stature in terms of changing the face of music.

His influence is tremendous, over a variety of music genres: blues, rhythm and blues, rock and roll, folk, hard rock, jazz and country. It was Muddy who helped Chuck Berry get his first record contract. The Rolling Stones named themselves after his 1950 song “Rollin Stone” and Jimi Hendrix covered one of Muddy’s songs called "Catfish Blues”. Hendrix recalled "the first guitar player I was aware of was Muddy Waters. I first heard him as a little boy and it scared me to death".

Cream covered “Rollin and Tumblin” on their 1966 debut album Fresh Cream. Another great Eric Clapton was a big fan of Muddy Waters when he was growing up, and his music influenced Clapton's musical career. Muddy’s songs were also covered by Canned Heat at the legendary Monterey Pop Festival and later adapted by Bob Dylan on the album Modern Times. Led Zeppelin’s biggest hits, “Whole Lotta Love”, is lyrically based upon the Muddy Waters hit "You Need Love", written by Willie Dixon.

Dixon wrote some of Muddy Waters' most famous songs, including “I Just Want to Make Love to You” that became a big radio hit for Etta James as well as the 1970s rock band Forghat. One of Muddy’s biggest hits “Hoochie Coochie Man that The Allman Brothers Band famously covered was big for them and Humble Pie and Steppenwolf as well.

In 1993, Paul Rodgers released the album Muddy Water Blues: A Tribute to Muddy Waters, on which he covered a number of Muddy Waters songs, including "Louisiana Blues", "Rollin' Stone", "Hoochie Coochie Man" and "I'm Ready" that included a number of famous guitarists such as Gary Moore, Brian May and Jeff Beck.

Muddy Waters' songs have been featured in long-time fan Matin Scorsese’s movies, including The Color of Money, Goodfellas and Casino. His music was used in Better Off Dead, the hit film Risky Business, and featured in the rockumentary The Last Waltz.

The Beatles referenced Muddy in the song Come Together: "He roller coaster/he got Muddy Waters." Van Morrison lyrics include "Muddy Waters singin', "I'm a Rolling Stone" from his 1982 song "Cleaning Windows", on the Album Beautiful Vision. Honestly, I could go on and on as long as I have room to write.

What impressed me most about the great Muddy Waters was that he created what every band since has configured musically. It was Mud, as he was sometimes called, who configured his band with a base, guitar, and instruments to enhance his talents.

Although there were many greatest produced out of his era – Muddy Waters lead the way and, dare I say, was the innovator of what the world now knows as Rock ‘n’ Roll. Mud might be best known for his beautiful Cadillac’s, being a lady’s man or as having Little Walter harmonic talents as his gifted sideman. I say, he is best known for changing the world of music and music has never been the same. And that’s my thought provoking perspective.