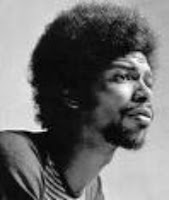 The phenomenon that was Gil Scott-Heron was truly a powerful voice that spoke to the world with profound essence. I’ve often heard that genius is a rare gift and those who have been given “IT” walk a fine line between that which we appreciate and that which they know themselves to be. To me he was Gil. I will call him that because he was one of us and from the first time I heard him; it felt like he was within me. His astute stature demands, however that he be called Mr. Heron and with that said, the bother will live forever and his prose will be eternal.

I must admit that it took me a minute to find the words to pay homage to this remarkable man. I don’t know for sure why I could not find the words; whether from shock or I didn't want to believe he was gone. Regardless, I will say with certainty that he was real, and although troubled, I felt his pain and I admired him for living life on life’s terms.

Moreover, his political commentary is what impressed me. He had the ability to rebuke bygone bogeymen such as Nixon, Reagan, and Agnew. Darts were also flung at contemporary targets, notably Barack Obama. “My president’s black / But the plan remains the same,’’ rapped Enoch 7th Prophet and who can forget the classics “The Revolution Will Not Be Televised’’, “Winter in America’’, “Beginnings (First Minute of a Brand New Day)”, and “Whitey on the Moon.’’

This man was the precursor to rap with some saying he was the “Godfather of Rap” although he often bristled at the suggestion that his work had prefigured rap. “I don’t know if I can take the blame for it,” he said in an interview last year with the music Web site The Daily Swarm. He preferred to call himself a “bluesologist,” drawing on the traditions of blues, jazz and Harlem renaissance poetics.

For sure, he was a poet and recording artist whose syncopated spoken style and mordant critiques of politics, racism and mass media made him a notable voice of black protest culture in the 1970s and an important early influence on hip-hop. He did establish much of the attitude and the stylistic vocabulary that would characterize the socially conscious work of early rap groups like Public Enemy and Boogie Down Productions. He also remained part of the DNA of hip-hop by being sampled by stars like Kanye West. Chuck D, the leader of Public Enemy, told The New Yorker in 2010 that Gil Scott-Heron is the manifestation of the modern word… He and the Last Poets set the stage for everyone else.”

Gil once described “Washington, D.C. as both capital and home town: “Symbols of democracy, pinned up against the coast / Outhouse of bureaucracy, surrounded by a moat / Citizens of poverty are barely out of sight / Overlords escape in the evening with people of the night.” He lived most of his adult life in New York, yet also spent some years in Washington, including a stint in the 1970s when he taught English at Federal City College (a predecessor of the University of the District of Columbia).

He was born in Chicago on April 1, 1949, and reared in Tennessee and New York. His mother was a librarian and an English teacher; his estranged father was a Jamaican soccer player. In his early teens, Mr. Scott-Heron wrote detective stories, and his work as a writer won him a scholarship to the Fieldston School in the Bronx, where he was one of 5 black students in a class of 100. Following in the footsteps of Langston Hughes, he went to the historically black Lincoln University in Pennsylvania, and he wrote his first novel at 19, a murder mystery called “The Vulture.” A book of verse, “Small Talk at 125th and Lenox,” and a second novel, “The Nigger Factory,” soon followed.

Working with a college friend, Brian Jackson, Mr. Scott-Heron turned to music in search of a wider audience. His first album, “Small Talk at 125th and Lenox,” was released in 1970 on Flying Dutchman, a small label, and included a live recitation of “Revolution” accompanied by conga and bongo drums. Another version of that piece, recorded with a full band including the jazz bassist Ron Carter, was released on Mr. Scott-Heron’s second album, “Pieces of a Man,” in 1971.

“Revolution” established Mr. Scott-Heron as a rising star of the black cultural left, and it’s cool, biting ridicule of a nation anesthetized by mass media has resonated with the socially disaffected of various stripes — campus activists, media theorists, coffeehouse poets — for four decades. With sharp, sardonic wit and a barrage of pop-culture references, he derided society’s dominating forces as well as the gullibly dominated:

During the 1970s, Mr. Scott-Heron was seen as a prodigy with significant potential, although he never achieved more than cult popularity. He recorded 13 albums from 1970to 1982, and was one of the first acts that the music executive Clive Davis signed after starting Arista Records in 1974. In 1979, Mr. Scott-Heron performed at Musicians United for Safe Energy’s “No Nukes” benefit concerts at Madison Square Garden, and in 1985, he appeared on the all-star anti-apartheid album “Sun City.”
But by the mid-1980s, Mr. Scott-Heron had begun to fade, and his recording output slowed to a trickle. In later years, he struggled publicly with addiction. Since 2001, Mr. Scott-Heron had been convicted twice for cocaine possession, and he served a sentence at Rikers Island in New York for parole violation.

Some of the content for this article appeared in print on May 29, 2011, on page A26 of the New York edition with the headline: Gil Scott-Heron, a Voice of Protest And a Music Pioneer, Dies at 62. R.I.P.


THE REVOLUTION WILL NOT BE TELEVISED