On The Road To Jerusalem 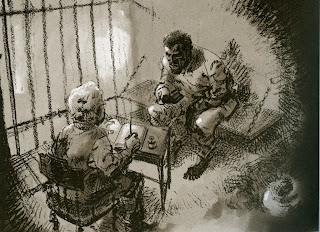 I am keenly aware that I stand on the shoulders of the ghosts of the greats who suffered, died, and sacrificed so much for a people degraded and scorn to which some might say cursed by the wretchedness of slavery. Let me say that one of my major faults is that I understand the power of words and know that finding written words can produce truth. Taking into consideration, often times, those word were written for the times and used to sway or justify that which one might want truth to remain hidden.

Someone I know sent me an email that contained the “Confessions of Nat Turner”. I had never read it before and knew very little about the man Nat Turner other than what his-story tells. I was so surprised because it was, in my opinion, unfathomable to believe much of what his supposed attorney wrote as truth. This caused me to do my own research and see what facts were available to reinforce the only known account of the Nat Turner Rebellion. What I found was many different interpretations of the events of that rebellion. There were few facts. What we know is that there was a rebellion and he was hung. Everything else is conjecture!

Here are the facts: Nat Turner was born into slavery October 2, 1800 on a Southampton County plantation. On August 21, 1831, he led a violent disorganized insurrection. The incident ended the emancipation movement in that region and led to even harsher laws against slaves. Benjamin Turner, his owner, allowed him to be instructed in reading, writing, and religion. Sold three times in his childhood and hired out to John Travis 1820s. He became a fiery preacher and leader of slaves claiming that he was chosen by God to lead them from bondage.

Believing in signs and hearing divine voices, Turner was convinced by an eclipse of the Sun in 1831 that the time to rise up had come and he enlisted the help of four other slaves in the area. An insurrection was planned, aborted, and rescheduled for August 21, 1831, when he and six other slaves killed the Travis family, managed to secure arms and horses, and enlisted about 75 other slaves in a disorganized insurrection that resulted in the murder of 51 white people.

Afterwards, Turner hid nearby successfully for six weeks until his discovery, conviction, and hanging in Jerusalem, Virginia after a trial that lasted twenty four hours, along with 16 of his followers. The incident put fear in the heart of Southerners, ended the organized emancipation movement in that region, resulted in even harsher laws against slaves, and deepened the schism between slave-holders that would culminate in the Civil War. This is all we know as fact.

Among many, perhaps most, African-Americans in the antebellum period or even today, Turner's legacy takes on heroic status as someone willing to make slave-owners pay for the hardships that they enacted upon the millions of children, women and men they enslaved. He is not mentioned in the same vain as the KKK in that they murdered, under cover of law, countless men, women, and children in what was nothing more than state sponsored terrorism. Like John Brown, Turner also thought revolutionary violence would serve to awaken the attitudes of whites to the reality of the inherent brutality of slave-holding.

My research shows one thing clearly. The supposed confession taken by attorney Gray is a myth written to produce financial gain and to induce fear. Turner was called a beast and a savage – maybe. I would argue that is what he was made to be, as he and others were sold like animals, to which his knowledge of the Old Testament told him that even God worked through acts of violence and inflected extreme punishment upon his enemies for his people.

It is reported that Turner said before he was hung that “they crucified Jesus didn’t they”. And that’s my Thought Provoking Perspective…