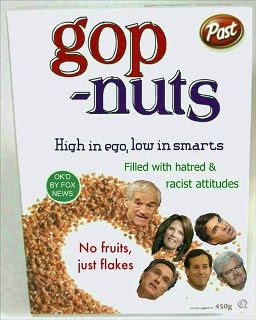 We all know that the “Pool of Fools” who call themselves the Republican candidates vying to replace President Obama are distasteful, insulting, pitiful, and a sad commentary to what I know as human. You know who they are - the Klan that wants to make Obama a one term president and take back their country!

If not, here’s a quick recap: Stone cold Rick Samtorum with his view of the “Real America”; Flipper Mitt Romney who they call “Him” who just received weak endorsement from John McCain; Newt Gingrich who wants blacks to get off welfare and get a real check; Rick Perry who is sorta, kinda still in the race – hmmm; Ron Paul who is still standing despite his senseless let the people of the same hue do what they want; and there is John Huntsman who they hardly mention. I can’t leave out the latest departure, Michele Bauchmann, who could not win the Iowa town she claims to be from and I will just mention that poor excuse Herman Cain because he insulted everyone who looks like him.

Not only are these wingnuts, oh sorry, these republican candidates, a sad commentary but so is Reince Preibus, RNC Chair and many of the other Republicans in the party, who I will call un-American to include the lately silent teabagging faction. They have taken disgrace to a whole new level. For example, Kansas House Speaker Mike O’Neal today relented and apologized for an e-mail he forwarded to fellow Republican lawmakers calling first lady Michelle Obama “Mrs. YoMama.” Patriotic right!

Then there was Marilyn Davenport, an elected member of the Orange County, Calif., Republican Central Committee, who forwarded an email picturing President Barack Obama's face on the body of a baby chimpanzee in April. She was censured by the committee and apologized, but refused to resign for it..."

The latest insults is the outrageously racist depiction of Michelle on the right-wing website Gateway Pundit as a grotesquely muscular armed Marie Antoinette. The racist caricature was based on a 1775 portrait by 18th Century French painter Jean-Baptiste André Gautier-Dagoty. The painting hangs in the Palace of Versailles outside Paris and this depiction is surely disrespectful and tasteless.

The racist comparison of Michelle to Antoinette is another in the endless knocks that Michelle lives an imperious and luxury lifestyle all supposedly at taxpayer expense. This is code language for an African-American that’s “uppity.” I might add that the First Lady happens to be, ah black. So the fury level soars and the slanders against her fly even hotter and heavier.

The GOP will use its endless back door channel surrogates of bloggers, right wing talk show gabbers, and tea party operatives to slur and slander Michelle to sow even more doubt and discord about President Obama’s policies and, by extension, him.

In the past the rules of political engagement have been clear. Presidents were fair game for any and every type of fair or gutter attack. Their wives and families, though, were off limits. But as the wife of the most politically assailed president in modern times by racial bigots, the rules of the political game have been smashed. Michelle will continue to be an inviting target of racial slander simply because she is who she is a fine and model First Lady, who is certainly no Marie Antoinette.

And the call themselves AMERICANS – what a transparent attempt to disguise or revive the memories of what I remember as the “Citizens Counsel” of a day I had hope was long past. And that’s my THOUGHT PROVOKING PERSPECTIVE!!!

http://johntwills.com
Posted by Unknown at 4:16 PM