A Manifestation of the Right - Armed and Dangerous 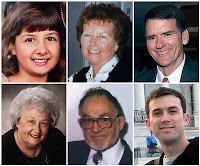 We've witnessed another sad day in America’s history to which I extend my condolences to the families of the dead and wounded. On Saturday in Tucson, Arizona where the savage murders that took the lives of a federal judge, a nine year old child, seriously wounding a Congresswoman and many others was simply a despicable act of terrorism. But what is disturbing is that I have not heard anyone from the right who screamed “Terror” for much of the last decade use the word.

I want to commend Pima County Sheriff Clarence W. Dupnik, who is leading the investigation into the shootings, for his honesty. He did not mince words in saying that vitriol spewed, mostly by Republicans, contributed to the tragedy in Tucson. He said, "There's reason to believe that this [suspect] may have a mental issue. And I think people who are unbalanced are especially susceptible to vitriol… People tend to pooh-pooh this business about all the vitriol we hear inflaming the American public by people who make a living off of doing that. That may be free speech, but it's not without consequences."

America has a long history of such tragic situations. There was the Oklahoma bombing, the murder of an abortion doctor, and the Holocaust museum shooting in recent memory. If we go back to the 1960’s, there was assassination after assassination: Dr. King, President Kennedy, his brother Bobby, Medger Evers, Malcolm X – get my point. No! Well the common thread linking such acts of violence were WORDS used by those who possessed views from an ideologically extreme perspective.

These self-righteous Tea Baggers and conservatives whose been doing what is tantamount to yelling fire in a crowd don’t seem to understand that what they are saying has a dangerous impact upon society and unstable individuals. Words are powerful and there are some in our society who are not equipped to understand that these people are making a living by using this divisive speech causing some to take much of this vitriol literally. It might even be a more sinister reason; playing to the hatred and bigotry that exists.

Let me start at the top with the new leader, a man who cries at the drop of a dime might have shown some emotion over this tragedy, if for no other reason than there was a nine year old innocent child killed, but there were no tears. During his remarks at a news conference Sunday, “the newly elected House speaker was as dry as tumbleweed,” said Courtland Milloy. Why had the man who cries just by thinking about the welfare of children not shed a tear over the death of a 9-year-old girl in that rampage?

We’re talking about a rampage that arguably can be contributed to the insane vitriolic language that the right has spewed since President Obama, an African American, began campaigning and was elected. It is Obama's opponents who carried guns to his speeches and cited Jefferson's line that the tree of liberty "must be refreshed from time to time with the blood of patriots and tyrants."

Mr. Speaker told the National Review just last year that then-Rep. Steve Dreihaus (D-Ohio) "may be a dead man" because he voted for President Obama's health-care law. "He can't go home to the west side of Cincinnati". Stephen Broden, a tea party-backed former Texas GOP congressional candidate, has said, "Our nation was founded on violence. The option is on the table… I don't think that we should ever remove anything from the table as it relates to our liberties and our freedoms."

Rep. Michelle Bachmann said, "I want people in Minnesota armed and dangerous on this issue of the energy tax, because we need to fight back. Thomas Jefferson told us, having a revolution every now and then is a good thing, and the people - we the people - are going to have to fight back hard if we're not going to lose our country." Then there was Sharron Angle, the Republican candidate in Nevada, who suggested “Second Amendment remedies”. These are just a few examples of discord that creates such a charged political climate which can cause an unhinged person to act in horrendous ways with dire consequences.

Am I suggesting that the shooter's motive in this case could have nothing to do with the statements of these people – possibly! But, no one should be surprised when misguided ideologues start showing up at town meetings armed with assault rifles - or at supermarkets with handguns. Remember, the Tea Party rallies when they gleefully brought them to where the president was speaking.

The conservative leadership must finally take on their fringe when it uses language that intimates threats of bloodshed. That means more than just highly general statements praising civility. I am all for and support the right to bear arms. However, I am also sane enough to know that everyone who buys a gun should have one. Its kinda like you have the right to jump off a bridge but that does not mean it is a good idea.

There is one statement that I will leave you with and it’s from the Congresswoman who struggles for life today. "We're on Sarah Palin's targeted list," she said, "but the thing is that the way she has it depicted has the crosshairs of a gun sight over our district. When people do that, they've got to realize there are consequences…"

Visit msnbc.com for breaking news, world news, and news about the economy