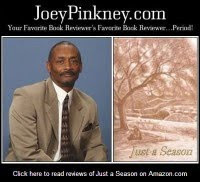 Just a Season is a luminous story into the life of a man who, in the midst of pain and loss, journeys back in time to re-examine all the important people, circumstances and intellectual fervor that contributed to the richness of his life.

This fictional narrative begins with a grief-stricken father visiting the grave site of his beloved son who was killed in a tragic accident – a moment that he and no other loving parent should ever have to face. As he sadly gazes at his son’s headstone and reads what is inscribed there, the dates 1981 – 2001 bring about an illuminating discovery.

The tiny dash that separates the years of one’s birth and death represents the whole of a person’s life. If this tiny dash were to tell his life’s story, what would it say? In Just a Season, the dash of this man’s life is revealed. What emerges from the pages of this book is a legacy of true benevolence and grace.

Joey Pinkney: Where did you get the inspiration to write Just a Season?

John T. Wills: The novel Just a Season was born out of a dreadful horror. From it, I was seeking to achieve a far-reaching noble purpose associated with the book’s success. About five years ago, I lost my only son due to a tragic automobile accident.

It was, without question, the worst thing imaginable for my wife and I, and certainly my darkest hour. Adding to the terrible sadness of this situation, my son’s death occurred on his son’s first birthday. Elijah, my grandson, is now six years old.

From this nightmare, I have come to understand that adversity can either destroy you or develop you. Having said that, my salvation was to take this lemon and make lemonade.

The primary purpose of the book was to use it as a vehicle to passionately empower, inspire, educate, enlighten and ultimately cause the reader to re-examine the content of their “Dash”. In our season of life, “We only have a minute, didn’t choose it, can’t refuse it, it is up to you to use it – it is just a tiny little minute, but an eternity in it”. We change the world, but we must first change ourselves.

Life is precious, regardless of the circumstances we might face. All of us endure mountains, milestones and valleys as well as the multitude of events and changes that occurred over time affecting what we know as life. Through this story, I hope the reader can understand they can overcome life’s challenges.

This is a story of tenderness, discipline, honor and love delicately shared with readers in a way that says this life, though brief, is significant. So hold it in highest regard for the “Dash” is our legacy to love ones, indeed to the world, which we are blessed to share, albeit, for Just a Season.

JP: What sets Just a Season apart from other books in the same genre?

I can recall a powerful statement once made during a sermon by my childhood pastor Reverend Cole. He said, “Unless and until you suffer enough pain, then and only then, will you reach deep inside and feel the breath that God has breathed into your soul coming eye to eye with your destiny finding your purpose.”

This powerful statement came to me as an epiphany during my time of adversity. You see, the title was predestined as the inspiration that speaks to a religious knowledge or understanding of life’s meaning – a life is Just a Season.

Having said, I believe this story was written by someone greater than myself. I was merely the vehicle to bring this great story to the hearts and minds of other souls. Just a Season is not a story you will simply read. Rather, it is a story that you will live. It is not HIS-story; it is our story that captures the journey of living with all the issues of a life witnessed through the eyes of an African-American man spanning decades.

JP: As an author, what are the keys to your success that led to Just a Season getting out to the public?

JT: I think I am a colorful writer and try to paint a visual picture with my words. I’m sure living through Jim Crow, segregation, integration and whatever you call the current system we live in today has colored my writing. Particularly, while writing Just a Season with respect to it being a historical narrative covering those things of significance to African-American people experienced over the past fifty years.

One of my reviewers said, “Not since The Color Purple” has she read anything so emotionally powerful. Another compared it to Roots, saying it is the stuff movies are made of. So in that sense, I feel more comfortable with a historical narrative or historical fiction that I call “fact-tion” because it allows me to add my personal interpretation.

Success is subjective at best, meaning it is determined from within. Otherwise, it is not then it is just a fleeting fantasy. As far as keys: mission, dedication, purpose and a desire to increase the equity within my “Dash”.

JP: As an author, what is your writing process? How long did it take you to start and finish Just a Season?

JT: I have probably considered myself a writer or maybe a storyteller all of my life as I have been writing for many years. However, I did not have an interest in publishing anything mainly because I did not have the time due to work, family, and all of the things that involved living, which consumes our lives.

So when the inspiration appeared, or circumstance, the story simply flowed from my being as if it was destiny. From the first word to the shelf, it took about nine months with me doing everything. To include writing, editing, cover design, webpage and making all the necessary agreements required to bring this phenomenal novel to the public.

I wrote this book because I believed it was a story that had to be told.

JT: I have a new project, which is the sequel to Just a Season titled Legacy. It’s ready to be released in the very near future. I have planted clues within Just a Season, setting up the continuation of it. On that note, I will only say that it will be thought-provoking, compelling, powerful and also a must read.

I’m also working on a story called Brownsville that resurrects the ghosts and richness of those segregated communities that existed as a result of Jim Crow that are now reduced to footnotes in the annals of time. I am a firm believer that knowledge is power and education is the single most important ingredient necessary to neutralize those forces that breed poverty and despair. This philosophy planted the seeds that cultivated a life, which is Just a Season.

http://johntwills.com/
Posted by Unknown at 5:36 AM