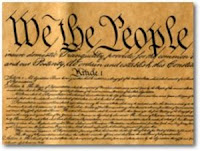 On the first day of the new Republican Congress, led by those folks who live and breathe the Constitution, showed their true convictions by subverting the very Constitution they pretend to honor. I said in an earlier post that the prolific French writer, historian, and philosopher Voltaire said, “History is a pack of tricks we play upon the dead”.

This time the conservatives and their revisionist approach to reality concerning that shameful exercise last week, reading the Constitution, is yet another example of how dishonest those who preach or use the Constitution to disguise their hidden agendas and/or motives.

The selective constitutional reading on the floor of the house was the latest indication that, for all the talk of honoring the Constitution, Tea Party-infused lawmakers are more interested in editing it. I don’t know how in good conscience they could only identify those passages they felt are appropriate because the entire document is appropriate, and frankly a reality. Those omitted parts were, in fact, the law of the land crafted by the Founding Fathers they worship. What the Republican majority choose to read aloud was clearly a sterilized version of the document. News Flash - there is only one version of the Constitution and it is the complete version.

Their excerpted version of the founding document conjuring a fanciful land that never counted a black person as three-fifths of a white person, never denied women the right to vote, never allowed slavery and never banned liquor is a fallacy. Therefore, if the truth is not told about such things as the three-fifths compromise, how can we learn from our founding if we aren't honest about it? Where they ashamed that most of them owned and profited from the despicable institution of slavery? I don’t think this is the case but I think most reasonable people should question their moral character.

What was most troubling for me was their not mentioning, or wanting to, the three fifths compromise heard and the omission of what is written concerning runaway slaves that said if a slave escaped to a free state, the Constitution required that they not be freed rather “delivered up” to their owners. By leaving out these parts amount to a fraud, in my opinion, that lets me know that, as always they use deception, which is not truth.

At the time of the first Presidential election in 1789, only 6 percent of the United States population was eligible to vote and they were white, male property owners. The 15th Amendment in 1870 was supposed to give all citizens the right to vote, regardless of their race. Well as history tells us, women did not gain the vote until the ratification of the Nineteenth Amendment in 1920; American Indians gained the vote under a law passed by Congress in 1924; and African Americans did not obtain the right to vote, fully, until the Voting Rights Act in the mid 1960’s.

Furthermore, it took the historic court case, Brown vs. Board of Education, in l954 to create what was originally stated in the document that all men are created equal to come close to its meaning of equality. Let me just say that the Supreme Court will require its own Thought Provoking Perspective with respect to decisions it has rendered, i.e., Plessey v Ferguson and the Dread Scott Decision. So for those sanctimonious, self righteous “real Americans” there is much disgrace contained within the document and policies that cannot be forgotten by just not reading the words out loud.

In the past 200 years, the Constitution has been amended 27 times. Americans have added laws only to take them back. In 1919, the 18th Amendment was passed. It banned the making and selling of alcohol. But it was impossible to get all people to stop drinking. Many people felt the government had no right to make laws about their private habits. So in 1933, the 21st Amendment was adopted. It repealed, or canceled, the 18th Amendment.

The Constitution is a living document which means it is open to the interpretation of the powers that be!!! I can only hope these folks don’t try to repeal those unmentioned parts they did not want read.

There are twenty seven amendments (changes) to the US Constitution. One of them (the 21st)is simply the repeal of a different one the 18th, prohibition).