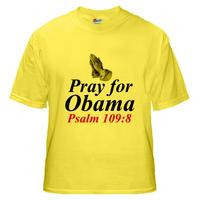 While reading the New York Times today I came across a blog written by Schott Vocab referencing a slogan that the right is using which seems to urge people to pray for an end to the President’s days. What is despicable about this is that they are using Bible verses to rally their faithful to bring harm not just to the President but to his family as well. Appalling, and inexcusable!!!

I have seen a few of these stickers that said “Pray for Obama – Psalms 109:8” but I honestly did not think much of it until I read this blog. Then I decided to use Google to see how viral this was and found that these people (and I use the word loosely) are selling posters, T-shirts and bumper stickers of this slogan that is disturbing, and dare I say sinister. However, as a number of commentators have noted, the wording that follows this bumper-sticker’s appeal is even more alarming. It reads as follows:

Let his days be few; and let another take his office.
Let his children be fatherless, and his wife a widow.

Let his children be continually vagabonds, and beg: let them seek their bread also out of their desolate places.

Let the extortioner catch all that he hath; and let the strangers spoil his labor.
Let there be none to extend mercy unto him: neither let there be any to favor his fatherless children.

Let his posterity be cut off; and in the generation following let their name be blotted out.

Let the iniquity of his fathers be remembered with the LORD; and let not the sin of his mother be blotted out.

Let them be before the LORD continually that he may cut off the memory of them from the earth.

Every time I think the “rightwing nuts” have gone too far – they find a way to go further. Most of these folks, I assume, believe they are Christians, although not of any faith I want to be part of. This seems eerily similar to the way the Bible was interrupted to justify slavery and other amoral atrocities by racists who call themselves “Americans”.

I have to ask myself “how can these people say the love God who they cannot see and cannot love a man (a great man) who they can see?” Who, by the way, is the elected President of the United States charged with the responsibility for their salvation?

President Obama has received treats of unprecedented proportions and now his family. I ask that we PRAY for our President and his family. If you agree, please repost and share this message to make others aware and ask all who believe this great man deserves our support and prayers to please do so. Pray that we are delivered from evil.

GOD BLESS YOU MR. PRESIDENT AND YOUR FAMILY...