The Nittany Lions Got Hammered 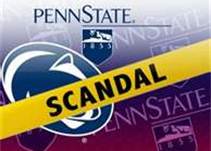 I will admit that I am like most men a huge sports fan and I love football; now to my many readers in England, I am not talking about soccer. I am talking about the self inflected tragedy at Penn State; more commonly known as the Nittany Lions football program. This is a school that promoted itself on the grandeur of ethics that has raised billions on the backs of young men. Today the college paid the price for its ethical ineptitude.

The NCAA hammered the Penn State football program for its role in concealing the Jerry Sandusky's sexual molestation acts, leveling Coach Joe Paterno's once revered team with stiff penalties and unprecedented fines that will hurt in ways worse than death. Here are the sanctions:
Penn State will not appeal the sanctions. School president Rodney Erickson signed a consent agreement with the NCAA and "accepts the penalties."

Penn State President Mark Emmert said at a press conference in Indianapolis that “The penalties reflect the magnitude of these terrible acts but also assures Penn state will rebuild an athletic culture that went horribly awry… Football will never be put ahead of educating, protecting and nurturing young people."
With the amount of money that this equates too - I have to ask, if Penn State and its fans who have always proclaimed the program was about more than winning. They will have the next decade to prove this theory. There is only one program that has been handed the death penalty - SMU in the 1980s. The reason it has struggled to find success since then isn't because of that penalty. It's because the school de-emphasized football.

The Nittany Lions football program was believed to be "too big to fail, indeed, too big to even challenge, has now been destroyed. It’s going to be nearly impossible to recruit a great or even good player when he knows he can't participate in the postseason until he is, at best, a senior. These cuts in available scholarships not only limit the new coach’s ability to bring in top-flight talent but will create significant depth problems for years.

It won't be until the 2020 season that Penn State would have a full complement of scholarships across all four of its classes. This leaves the once mighty giant a pile of rubble with an uncertain future. The good thing about this sanction is that Paterno is no longer the winningest coach in college football history. This honor is now returned to its rightful owner Grambling's Eddie Robinson.

I rarely if ever write about sports because frankly it’s a game like Pimps and Hoes where the organization gets the money and the players for the most part are taken advantage of in every sense of the word, and most of the players are of color. This despicable incident proves the power corrupts and absolute power corrupts absolutely. To which I am one who says “it did not go far enough”.

And that’s my Thought Provoking Perspective…

http://johntwills.com
Legacy – A New Season the sequel is now available on Kindlehttp://www.amazon.com/dp/B008HJRPE0
Posted by Unknown at 12:22 AM