All Hail the Queen - Aretha Franklin 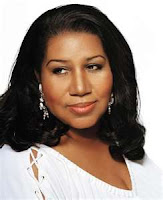 I so very honored to have this vehicle to communicate to and with so many people all over the world. Today I want to use it to say HAPPY BIRTHDAY to "The QUEEN".

Aretha Franklin, the world renowned Diva, who is without question the most profound voice of our time and universally considered as the Queen of Soul. However, she is not only a giant of the soul music genre, but to pop music as a whole. More than any other performer, she epitomized soul derived from her gospel-charged roots.

The Queen established an astonishing run with hits like "Respect," "I Never Loved a Man," "Chain of Fools," "Baby I Love You," "I Say a Little Prayer," "Think," "The House That Jack Built," and so many more great tunes during her career that we love.

Aretha or Ree Ree, as we affectionately call her sometimes, earned the title "Lady Soul" early in her career, but I think "Queen of Soul" is more appropriate, which she has worn uncontested since she recorded her first tune. Yet as much of an international institution as she's become, much of her work, if not all, is fitfully inspired by her gospel roots making her music a must, and in some cases a necessity, for our listening pleasure.

Franklin grew up in the bosom of gospel music, one of six children, and daughter to a Baptist preacher. Moving from her birthplace of Memphis, Tenn. and finally settling with her family in Detroit. Her early years were filled with musical experiences and environments from two cities that were brimming with groundbreaking music – from gospel to soul to R & B – in the 1950s and 60s.

Franklin’s first recordings with Columbia did not receive the accolades the label thought they would receive, and it wasn’t until she began her career at Atlantic Records did she find her real place in music, eventually becoming the recipient of 18 Grammies.

Aretha’s voice has been the prize to which so many females over the last 50 years have set their eyes, striving to emulate with success her depth of feeling, her soulful cadence and the natural essence that seems to flow from within her and into her music. From girl groups to solo artists, so many women, young and old, see her more than just a role model for music, but for womanhood in general.

As a compliment to the Queen, I see her in the metaphorical sense like the guy from the movie "The Curious Case of Benjamin Button", which was about a man who gets younger as he ages. She gets better with time! Aretha's ongoing lifelong career is bar-none one of the most profound and greatest of our time. Her music remains the foundation for so many to live-by and love, and it has stood the test of time.

God Bless you and HAPPY BIRTHDAY our Queen.

No Justice – No Pease. And that is my Thought Provoking Perspective.

http://johntwills.com
Posted by Unknown at 7:08 PM