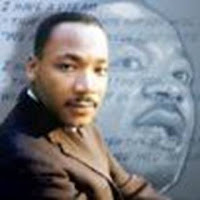 It seems like I can remember so many things since I have, as I call it, mentally matured with what I perceive as real. Some call it thought-provoking. This post is intended to be thought-provoking because I want to capture words once spoken by a King. They were said almost a half century ago and they resonate as clearly today as when they were spoken. Now, let me make it clear from the beginning - if you have heard them before great! If you have not; pay close attention because they speak truth to morality. Let me also add that the words are captured and inspired from a speech by the immortal Martin Luther “the King”.

I see war as an unjust, evil, and futile. The time has come for America to hear the truth about the tragic wars in which they are now engaged. The day has passed for superficial patriotism. He who lives with untruth lives in spiritual slavery. Freedom is still the bonus we receive for knowing the truth. "Ye shall know the truth," says Jesus, "and the truth shall set you free." I agree with Dante, that the hottest places in hell are reserved for those who in a period of moral crisis maintain their neutrality. There comes a time when silence becomes betrayal.

Even when pressed by the demands of our inner truth, men do not easily assume the task of opposing government policies, especially in time of war. Nor does the human spirit move without great difficulty against all the apathy of conformist thought within one's own soul and in the surrounding world. Moreover, when the issues at hand seem as perplexing, as they often do in the case of these dreadful conflicts, we're always on the verge of being mesmerized by uncertainty.

Millions have chosen to move beyond the prophesying of smooth patriotism, to the high grounds of firm dissent, based upon the mandates of conscience and the reading of history. Now, one of the difficulties in speaking out grows from the fact that there are those who are seeking to equate dissent with disloyalty. It's a dark day in our nation when high-level authorities will seek to use every method to silence dissent, i.e. the 99’ers. The truth must be told. It appears that anyone who opposes war is a traitor or an enemy of our soldiers. Understand that war does not always mean military conflict.

There is an obvious and almost facile connection between any war and the struggle many have been waging in America. Once there was a shining moment in that struggle. It seemed that there was a real promise of hope for the poor, both black and white, through Poverty Programs. I watched these programs broken as if they were idle political playthings of a society gone mad. America will never invest the necessary funds or energies in rehabilitation of its poor so long as these insane adventures continue to draw men and skills and money, like some demonic, destructive suction tube.

You may not know it but, it is estimated that we spend $500,000 to kill each enemy soldier, while we do not spend a hundred dollars for each person classified as poor, and much of that goes for salaries of people hired to, supposedly, help the poor. Therefore, I am increasingly compelled to see war as an enemy of the poor. Do not consider just the wars in the Middle East but look at the war being waged against you and your community. They continue to tell us that this nation is the greatest nation in the world. I say that measure should be judged by how the nation treats her old, young, and poor.

This great country takes our young men, and women, sending them thousands of miles away under the guise of guaranteeing liberty others. Who've been crippled by society because there are no jobs; before or after the conflict. Yet, they have not found peace or given liberty to citizens in Mississippi, Georgia and New York or, in the slums of Washington, DC. Frankly, this is a cruel manipulation of freedom and justice while, in the meantime, the political arena has become a disgrace.

The only change that came from America were increased troop commitments in support of governments which were singularly corrupt, inept and without the popular support of their own people. All the while the people read our leaflets and received regular promises of peace, democracy and land reform. Now, they languish under our bombs and consider us the real enemy. They move sadly and apathetically as we herd them off the land of their fathers into jails and camps, where minimal social needs are rarely met. They know they must move or be destroyed by our bombs.

So they go, primarily women, and children and the aged. They watch as we poison their water, as we kill a million acres of their land and weep as the bulldozers roar through the areas where they live. They wander into the towns and see thousands of children, homeless - without clothes, running in packs on the streets like animals. They see the children degraded by our soldiers as they beg for food. They see the children selling their sisters to our soldiers and soliciting for their mothers. We have destroyed their two most cherished institutions: the family and the village. Please remember this: “You cannot free anyone if they do not want to be free”. Yet, our government tells us we would be treated as liberators.

This is the role our nation has taken, the role of those who make peaceful revolutions impossible while refusing to give up the privileges and the pleasures that come from the immense profits of overseas investments. I'm convinced that if we are to get on the right side of the world revolution we, as a nation, must undergo a radical revolution of values. We must rapidly begin the shift from a thing-oriented society to a person-oriented society. When machines and computers, profit-motives and property rights are considered more important than people, the giant triplets of racism, militarism and economic exploitation cannot be conquered.

A true revolution of values will soon cause us to question the fairness and justice of many of our present policies. On the one hand, we are called upon to play the Good Samaritan on life's roadside, but that is only the first step. One day, we must come to see that the whole Jericho Road must be changed so that men and women will not be beaten constantly and, then robbed as they make their journey on life's highway. True compassion is more than flinging a coin to a beggar. A true revolution of values will soon look uneasily on the glaring contrast of poverty and wealth with righteous indignation.