What Happened to the BLACK FAMILY? 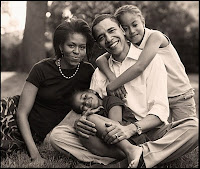 In a past life, one of many that I have enjoyed, I taught a college course called the Psychology of the Black Family. From time to time I go back and look through some of those old term papers from that class to which I become enthralled by the content. The assignment given to each student was to write a term paper on “The Breakdown of the African American Family”. As I read through some of the thirty or so papers I found several very significant points and a common theme throughout the papers. I decided to capture some of the key points from those research papers to share with you.

I know this “Thought Provoking Perspective” may cause some controversy and maybe some hate mail. Nonetheless, my intent is to, maybe, create some dialog within our consciousness as to why the black family, our community, and black people are the least likely to work together as a solid unit to the benefit of each other as other ethnic groups do.

During slavery, and from the 1800's through the 1980's, the concept of family was tight knit, strongly woven, and the envy of most cultures. The African American family unit survived in spite of unimaginable cruelty and adversity. It is only recently, during the last thirty years or so that the African American family became dysfunctional and lost its direction. One has to think for some twisted reason we do not feel whole because in many cases we allow others define us.

I can recall a powerful statement made by one of the students who expressed that she thinks the different social pressures on black men and women have contributed to the weak traditional family structure. Black women have been able to achieve more economic and educational success than black men, leading to them being higher wage earners. This inequality has eroded black women's reliance on men and their willingness to compromise on their needs or expectations, which in turn has led to resentment and disappointment on both sides.

Black women raise children, too often alone, and the bitterness that difficult task creates causes some women to make derogatory complaints against men in general, tainting their daughters and shaming their sons. Also, it seems that black women do not often hold their sons to as high a standard as their daughters, making them further vulnerable.

If proper behavior is not modeled for young people, they have difficulty fulfilling those expectations. This creates the perfect ingredients for the dismal situations to occur in our community. She went on to say that a lot of that has to do with our values, and the lack of knowing the importance of loving our communities, our families, and ourselves.

These are 12 key factors expressed from my student’s outstanding research papers:

1. The Vietnam War: Hundreds of thousands of strong, intelligent, hardworking black men were shipped abroad to be murdered, returned home shell shocked, severely damaged, or addicted. Many of which were unable to get back on track after returning from war because the government abandoned them.

2. COINTELPRO: The covert actions of J. Edgar Hoover in the wake of the Civil Rights Era and the Black Power Movements all but insured that anyone speaking out against the governments wrong doings would receive either long prison sentences or bullets. This fear silenced our forward progression, fueling distrust, and removing many of our leaders as well as potential future leaders.

3. The Assassinations of the 1960’s: Left a huge void in leadership that has yet to be filled, particularly within the Civil Rights Movement to include within the community. Instead, a universal acceptance of the pimp/hustler image in popular culture that presented alternative heroes to black youth, which resonant in the form of Gangster Rap. This genre leads to the glorification of the criminal element amidst immature minds that lack familial structure. In addition to black on black crime and staying silent while black youth are murdered by other black youth.

4. The Feminist Movement: Backed by liberal white women to fight for the equal rights of women; the same rights most black men had yet to fully be granted. A lot of black women got lost in the rhetoric of how men were keeping them down, losing sight of the fact that black men were down there with them. To this day, the power exchange and infighting among black men and women, is sadly considered the norm, a tool enumerated by Willie Lynch.

5. Oliver North & the Contras: The volume of drugs, mainly crack cocaine that flooded the black community during the 80 to which most of the drugs came in on U.S. ships with the support of the Government. The CRACK era escalated death and incarceration rates, unwanted pregnancies, neighborhood prostitution and a culture of violence. Folks were selling their kids to hit the pipe, and selling their souls to sell what went in that pipe. This epidemic destroyed our community in ways slavery could never have done. This form of contemporary was the cruelest type of slavery imposed upon our communities.

6. Mass media brainwashing & mind control: The influences of propaganda and distorted images of beauty and male/female roles. Shows like Life Styles of the Rich and Famous, Dynasty, Different Strokes, and the Jefferson’s for example. The American conscious during the 80's was money driven. Materialism became the idea that stuff defines you and others.

7. Education: The lack of proper education, financing support, and knowledge being taught by African American professionals. In addition our leaders and academics failed us as they fled the hood in droves for the suburbs during those crazy 80's. Prior to this period, kids saw on a daily basis married couples that looked like them, even if they didn’t live in their households. Yet the great migration to greener pastures left a void in the community leaving it to be filled by the image of the hustler-pimp-thug, ruthlessness, and violence.

8. Communication: This speaks to education of self and listening to the wrong messengers. The communication of values - parents became unavailable to hand down family legacies, traditions and value systems. We're like POW's locked in the same building for 20 years, unable to converse thru cement walls confined by our personas, egos, insecurities, isms etc.

9. The Black Church: Many churches have lost their way. The business of religion is bankrupting our communities. Many churches are not touching the lives of those outside of the church most in need. Just like back in the day when it was the design of slave masters, who did so much wickedness to use this as a tactic by offering a bible and in most instances nothing more than pain and a promise of a better life to keep us in line. This is not the same as faith which was necessary to survive our struggles.

10. Urbanization - work and home were once connected. Parents were near their families and children understood work as a way of life. Urbanization helped create “latch key" kids and images of hard work disappeared while replacing it with material objects.

11. Social Services: The advent of the system of welfare that demanded the absence of the influence of the black man in the home. Before Claudine during the early 50's welfare was a Midwestern farmer hook up and back then you HAD to be a complete family to apply. So the laws for welfare changed in the inner-city while many in the farm lands of Mid America started to change in culture to fit the application for welfare. For decades to follow, trillions of dollars in government spending on ineffective social programs in our cities have not by enlarge benefited the mobility of the family.


The next time you look in the mirror or just look at the picture I have inserted which might give you something to think about. And that’s my THOUGHT PROVOKING PERSPECTIVE!

You are welcome to add your comments, views, and perspectives.

http:johntwills.com
Posted by Unknown at 4:33 PM