So Say Bachman - A Declaration of Dependence 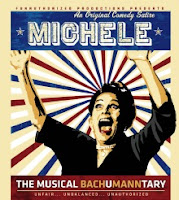 Well folks, the “Good Ol’ Boys” and the “Tea Party Princess” have taken the leap. Yeap – they did it!! I have said both of these group are akin to the “Citizens Councils” of days long gone. I can vividly remember when people with this mentality roamed the nation, with impunity, causing trepidation and terror. Let me also remind you that it wasn’t very long ago but obviously, we, sane people and people of color, have forgotten this horrible time when danger was afoot like the mean-spirited venom of a snake.

Now to be fair, all of us know that racism and bigotry exist and of course it is fair to say that each of us harbor some of it, for whatever reason. Minorities surely know this because there is not a day that goes by where we don’t feel it. Surely most people can see this today on a grand scale – just look at what “they” say and do with regard to President Obama. These so-called real Americans have become more outspoken , and frankly more blatant than ever. Will the resurrection of Bill Connor be near.

A few days ago two of the eight GOP gang of challengers for the 2011 Presidential, Michele Bachmann and Rick Santorum, signed a pledge that contained a vial statement “That Black Folks Were Better Off As Slaves” according to news reports. SHOCKING!!! Of course some will say, “she’s just talking and we have freedom of speech”. I agree except, you cannot yell fire, if there is none, in a crowded theater. Moreover, when you say something it is one thing but when you sign a pledge, a formal document – that is akin to shouting fire in the theater.

“The Marriage Vow: A Declaration of Dependence Upon Marriage and Family” which they pledged has at least one thing most Americans and particularly African American’s should find objectionable. The fact that these two GOP candidates for the presidency affixed their names to a statement that say somehow “Black people were better off during slavery than they are living during the era of a Black President”. Can there thinking be more clearly exposed? Now, for those who say racism is dead in the year of our Lord 2011 with a Black President; you are dead wrong.

The document not only offends Black people. It speaks to their anti-gay marriage, anti-Islamic and anti-porn views, anti, anti, anti.. I guess I should say here that I do agree with the pledge that speaks to human trafficking because they did not express a desire to sell us back into slavery - YET. Before I continue let me tell you what was featured at the very top of the document.

“Slavery had a disastrous impact on African-American families, yet sadly a child born into slavery in 1860 was more likely to be raised by his mother and father in a two-parent household than was an African American baby born after the election of the USA’s first African-American President.”


Given that families were broken up regularly through sales during slavery and that rape by masters was the norm, this could not be more offensive. Now we know what they mean when they constantly say, “We want to take our Country Back”. Putting aside the stupidity, I could not be more angry because they said what the feel taking a shot at the president and all of us in the process. It is the opposite of persuasive and is another reason Republicans repel us.

To be fair, the Marriage Vow did say slavery was “disastrous” but they appeared to be arguing that slavery was good or, as stated, slavery was worse than Barack Obama. Right here I am going to be fair and balance like the “Fox and Fool”. They used a footnote to a study by black scholars who dare I say was someone who would remind me of my Uncle whose name was Tom and the story gets even more disturbing.

The study they cite was published in 2005, which means that any comparison to slavery must be made, not with our first black president, but with our 43rd white one – “W”. Furthermore, the data in the study only dates back to 1880, which means they not only had to stretch the pretzel to include Barack Obama and conflate the data with slavery.

A reporter for The Plum Line attempted to put the whole matter in perspective: Expect lots more of this. The real question is what Bachmann (and Cain, and Santorum) wouldn’t sign if asked by social conservatives — and what, if anything, Mitt Romney, or Tim Pawlenty, or Rick Perry would actually oppose as too extreme. The answer appears to be: nothing. It’s true that Bachmann is the only one to make this “vow” so far. But it’s early yet.

Now, here is why this issue and the remarks should matter to every Negro, Black person, and African American (maybe I should have added Colored because that’s probably how we are still viewed) we do not have the right to vote like all other citizens. The 1965 Voting Rights Act says, in essence, that we cannot be deterred from voting and ever so many years a president has to resign the amendment for African Americans to reaffirmed the vote. When it came before 43 I was very concerned that he might not sign it. Mainly because he refused to ever attend an NAACP convention – among other things like Hurricane Katrina.

There was an ominous and shameful period called segregation where individuals and states made great efforts to deny African-Americans access to newfound constitutional rights, racial segregation was the norm and courts gave legal sanction to the principle of "separate but equal." Jim Crow, a name derived from a fictional minstrel character, has long been used to refer to this especially tortured time period in our nation's story -- one that was marked by violence, lynchings and the rise of the KKK.

Former President Bill Clinton has observed that "There has never been in my lifetime, since we got rid of the poll tax and all the other Jim Crow burdens on voting, the determined effort to limit the franchise that we see today." Clinton's effort to establish a parallel between the laws now being proposed to make voting more difficult and the efforts used during the Jim Crow era was intended to sound an alarm about a nation-wide strategy that threatens the exercise of our most important and central civil right -- the right to vote.

African American’s were denied access to the ballot box by a sophisticated matrix of Jim Crow restrictions that imposed burdensome hurdles and barriers that made voting difficult if not impossible. For example, literacy tests were written and administered in such a way that few whites failed, while blacks with college educations were routinely rejected. Understanding tests locked black voters out by requiring that anyone seeking to register to vote be able to read and write any article of the Constitution.

Just imagine, if someone from this Klan was in the oval office. I've said it before, we need to be concerned but now I am saying it time to be afraid – VERY AFRAID.

And that is my Thought Provoking Perspective.


VIDEO: Whoopi Goldberg loses it on 'The View'