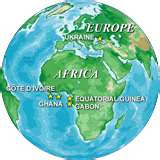 In the beginning there was a place where history tells us mankind was born. In the olden times, this place of magnificent splendor was known as Pangaea. It consumed all of the earth’s land mass and was also the birthplace of civilization. Today, we know it as Africa. Since the evolution of its existence there have been many tribes, nations, countries, and cultures to dot its landscape. By virtue of its wealth many civilizations of great stature have altered the course of the world.

So for the purposes of this historical narrative exploring succinctly the African American Diaspora I must start at the beginning, in order to take you on a journey that I believe is the greatest story ever told. I will begin at a time that is significant to the African American plight around 500 AD. The region was on the coast of West Africa where there were three might empires that flourished. The empires of Ghana, Mali, and Songhai had powerful army’s and controlled great wealth that included large quantities of gold, fine manufactured goods, thriving agriculture, and enormous profits from trading.

Their empire's economic strength and centralized political control made it easy to suppress revolts. The rulers of these nations were strong, surrounded by competent loyal government officials, and military commanders who were able to unify empires composed of di­verse peoples with different languages, cultures, and geographic locations. The people who inhabited this region were of the Kru, Ashanti, Fante, Ewe, Yoruba, and the Ibo nations.

The empire of Ghana was founded along the Niger River between the third and fifth centuries. Ghana was established by the Soninke people of West Africa, who quickly developed an economic life com­prising agriculture, manufacturing, and international trade. They were superior metalworkers and pro­duced iron swords and other weapons used to conquer neighboring peoples while they effectively maintained control over their territory. The empire's growth was relatively slow until Ghana began to trade with Arab ports on the Mediterranean coast and with other kingdoms of East Africa on the Red Sea.

Ghana's ascent to great power was directly related to its acquisition of gold. The name Ghana meant "warrior king," used to refer to the empire because of its gold. It was written that Ghana's gold was so abundant that the king's dogs wore gold collars. Al-Bakri, an Arab geographer, wrote that the king owned a nugget of gold so big that he could tether his horse to it. At its height of power Ghana had a functioning judiciary system and other institutions to govern the nation’s people. The empire was ruled by a king supported by several provincial governors and viceroys. Ghana dominated the Sudan for three hundred years.

The empire of Mali differed considerably from the Ghana. It became a mighty nation in the sev­enth century when the small Mandingo state on the upper Niger River was transformed by two great African leaders - Sundiata Keita and Mansa Musa. Although Sundiata Keita began to transform the state into a great empire, its growth was slow until Mansa Musa became it ruler. Mansa Musa, a devout Muslim, set out in 1324 on a pilgrimage to Mecca, the holy city for Muslims. His entourage in­cluded about sixty thousand persons, including twelve thousand servants. As many as five hundred servants each carried a staff of pure gold weighing six pounds. Eighty camels carried an average of three hundred pounds of gold each. These riches were to be distributed as alms and gifts.

Upon his returned from his pilgrimage, Mansa Musa directed his architect to design buildings in Tim­buktu and other cities under his control. At times, Mali’s empire numbered far more than one hundred thousand people. During this time, Timbuktu itself had a population of more than one hundred thousand people. It was a busy place where merchants displayed their merchandise to local and international consumers. Caravans from distant places frequently came to Tim­buktu to exchange their exotic goods for gold.

Tim­buktu is believed to be the first great university, rising to its highest level of development during the Songhai’s empire between 1493 and 1529. During this time, the University of Timbuktu produced more than forty books on subjects ranging from logic, theology, ethics, mathematics, and rhetoric. Akmed Baba was the last chancellor of the university and was considered one of the great intellectuals of the sixteenth century.

Mali's power derived from strong rulers, centralized govern­ment, and a successful economic base of agriculture, manufacturing, trade, and amazing wealth in gold. When Mansa Musa died in 1332, the Mali Empire began to disintegrate. Squabbling local rulers could not agree on a central form of government and it neigh­bors attacked the kingdom's cities. By the mid-1400’s, the Mali Empire was decisively ­destroyed by the sons of the king of Gao. Their revolt set into motion the formation the Songhai Empire, which inherited a solid economic base from its prede­cessor, its growth was substantially accelerated when Askia Mohammed a general who had been prime minister gained power in 1493.

In his thirty-six-year quest to make Songhai the most powerful empire in the world, Askia Mohammed embarked on an effort to expand trade to include European countries. He eventually controlled most of West Africa, an area larger than Europe. The Europeans took notice to its wealth and Askia’s greed or naiveté creating an inhumane partnership of destruction. It is my opinion and would argue this was a pivotal point in the history of our past because it was during his rule that the sale of Black slaves became a major business.

Askia was a master politician and a superior leader of people. He restructured the army, secured a system of banking and credit, and established the cities of Gao, Walata, Timbuktu, and Nenne as major intellectual centers where scholarships were encouraged. Timbuktu was a grand city whose stories of intrigue and mystery made it one of the most celebrated cities of its time. It flourished as a business district, a reli­gious site with the Great Mosque, and an intellectual center with the University of Sankore.

Although many of the peoples of Songhai worked at making tools, weapons, ceremonial items, and artworks of bronze, tin, copper, and gold, the overwhelming majority were farmers and warriors. The farmers grew millet and other crops and spent much of their time tending cattle. Artisans included goldsmiths, wood sculptors, brass casters, cotton spin­ners, linen weavers, leatherworkers, and iron fabrica­tors. Traders specialized in exchanging ivory, iron, gold, cattle, and clothes for salt, medicine, books, jew­els, and other goods from traders to the north and along the Red Sea and the Indian Ocean. Songhai achieved many military conquests and the empire reached its zenith in the fifteenth and sixteenth centuries.

The decline of the Songhai Empire marked the end of the great West African empires. I believe it was as a result of entering into an unholy alliance to participate in the slave trade where millions were sold into bondage - never to return. Although, there are others who claim that the collapse came from the collision of two great religions Islam and Christianity. To that point, I would like you to pay attention as we travel through the Chronicles with respect to the roles each of these religions played upon a naive people. Let me ask that you are mindful that there was no word “GOD” in any African language before the coming Europeans nor was there a word “Allah” before the coming of Muslims.

Listen to internet radio with John T Willschronicles on Blog Talk Radio
Posted by Unknown at 8:46 AM