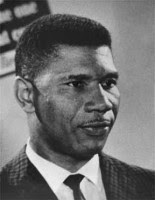 Medgar Wiley Evers was born in Decatur, Mississippi on July 2, 1925; dying the victim of a racially motivated assassination on June 12, 1963 in Jackson, Mississippi after attending a rally. He was the third of four children of a small farm owner who also worked at a nearby sawmill. His social standing was impressed upon him every day but Evers was determined not to cave in under such pressure. He once said his mission was evident at the age eleven or twelve when a close friend of the family got lynched.

He walked twelve miles each way to earn his high school diploma and joined the Army during the Second World War. Perhaps it was during the years of fighting in both France and Germany for his and other countries' freedom that convinced Evers to fight on his own shores for the freedom of blacks. After serving honorably in the war he was discharged in 1946, he began working for the National Association for the Advancement of Colored People (NAACP) in 1952. Evers travelled throughout the state of Mississippi trying to encourage voter registration and worked tirelessly to enforce federally mandated integration laws.

On 12 June 1963, hours after President John F. Kennedy gave a televised speech condemning segregation, Evers was shot in the back by a high-powered rifle while returning home. He crawled to the house and collapsed in front of his wife and three children; he died an hour later. The rifle found at the scene belonged to Byron De La Beckwith, a member of the all-white Citizens' Council, a statewide group opposed to racial integration akin to the KKK. Beckwith was tried twice, but both trials ended with a hung jury and he was released.

Nearly thirty years later, thanks to the persistence of Evers' widow, Myrlie Evers-Williams, the case was reopened and Beckwith was tried and convicted in 1994, and the conviction was upheld by the state supreme court in 1997. Evers-Williams published For Us, The Living in 1967; Beckwith's trial was the basis for the 1996 film Ghosts of Mississippi that starred Whoopi Goldberg.

The Mississippi in which Medgar Evers lived was a place of blatant discrimination where blacks dared not even speak of civil rights, much less actively campaign for them. Evers, a thoughtful and committed member of the NAACP wanted to change his native state. He paid for his convictions with his life, becoming the first major civil rights leader to be assassinated in the 1960s.

Evers was featured on a nine-man hit list in the Deep South as early as 1955. He and his family endured numerous threats and other violent acts, making them well aware of the danger surrounding his activism. Still he persisted in his efforts to integrate public facilities, schools, and restaurants. He organized voter registration drives and demonstrations. He spoke eloquently about the plight of his people and pleaded with the all-white government of Mississippi for some sort of progress in race relations. To those people who opposed such things, he was thought to be a very dangerous man.

In some ways, the death of Medgar Evers was a milestone in the hard-fought integration war that rocked America in the 1950s and 1960s. While the assassination of such a prominent black figure foreshadowed the violence to come, it also spurred other civil rights leaders, also targeted by white supremacists, to new fervor. They, in turn, were able to infuse their followers with a new and expanded sense of purpose, one that replaced apprehension with anger.

Still the scars of racism kept accumulating. Evers was astounded by the living conditions of the rural blacks he visited on behalf of his insurance company. Then in 1954 he witnessed yet another attempted lynching. "My father was on his deathbed in the hospital in Union, Mississippi," Evers related in Martyrs. "The Negro ward was in the basement and it was terribly stuffy. My Daddy was dying slowly, in the basement of a hospital and at one point I just had to walk outside so I wouldn't burst.

On that very night a Negro had fought with a white man in Union and a white mob had shot the Negro in the leg. The police brought the Negro to the hospital but the mob was outside the hospital, armed with pistols and rifles, yelling for the Negro. I walked out into the middle of it. I just stood there and everything was too much for me.... It seemed that this would never change. It was that way for my Daddy, it was that way for me, and it looked as though it would be that way for my children. I was so mad I just stood there trembling and tears rolled down my cheeks."

Evers quit the insurance business and went to work for the NAACP full-time as a chapter organizer. He applied to the University of Mississippi law school but was denied admission and did not press his case. Within two years he was named state field secretary of the NAACP. Still in his early thirties, he was one of the most vocal and recognizable NAACP members in his state. In his dealings with whites and blacks alike, Evers spoke constantly of the need to overcome hatred, to promote understanding and equality between the races. It was not a message that everyone in Mississippi wanted to hear.

Telephone threats were a constant source of anxiety in the home, and at one point Evers taught his children to fall on the floor whenever they heard a strange noise outside. "We lived with death as a constant companion 24 hours a day," Myrlie Evers remembered in Ebony magazine. "Medgar knew what he was doing, and he knew what the risks were. He just decided that he had to do what he had to do. But I knew at some point in time that he would be taken from me."

Evers must have also had a sense that his life would be cut short when what had begun as threats turned increasingly to violence. A few weeks prior to his death, someone threw a firebomb at his home. Afraid that snipers were waiting for her outside, Mrs. Evers put the fire out with the garden hose. The incident did not deter Evers from his rounds of voter registration or from his strident plea for a biracial committee to address social concerns in Jackson. His days were filled with meetings, economic boycotts, marches, prayer vigils, and picket lines and with bailing out demonstrators arrested by the all-white police force. It was not uncommon for Evers to work twenty hours a day.

On June 12, 1963, U.S. president John F. Kennedy, who would be assassinated only a few short months later, echoed this sentiment in an address to the nation. Kennedy called the white resistance to civil rights for blacks "a moral crisis" and pledged his support to federal action on integration.
That same night, Evers returned home just after midnight from a series of NAACP functions. As he left his car with a handful of t-shirts that read "Jim Crow Must Go," he was shot in the back. His wife and children, who had been waiting up for him, found him bleeding to death on the doorstep. "I opened the door, and there was Medgar at the steps, face down in blood," Myrlie Evers remembered in People magazine. "The children ran out and were shouting, 'Daddy, get up!

Evers died fifty minutes later at the hospital. On the day of his funeral in Jackson, even the use of beatings and other strong-arm police tactics could not quell the anger among the thousands of black mourners. The NAACP posthumously awarded its 1963 Spingarn medal to Medgar Evers. It was a fitting tribute to a man who had given so much to the organization and had given his life for its cause.

Rewards were offered by the governor of Mississippi and several all-white newspapers for information about Evers's murderer, but few came forward with information. However, an FBI investigation uncovered a suspect, Byron de la Beckwith, an outspoken opponent of integration and a founding member of Mississippi's White Citizens Council. A gun found 150 feet from the site of the shooting had Beckwith's fingerprint on it.

Several witnesses placed Beckwith in Evers's neighborhood that night. On the other hand, Beckwith denied shooting Evers and claimed that his gun had been stolen days before the incident. He too produced witnesses--one of them a policeman--who swore before the court that Beckwith was some 60 miles from Evers's home on the night he was killed.

Perhaps the most encouraging aspect of Medgar Evers's story lies in the attitudes of his two sons and one daughter. Though they experienced firsthand the destructive ways of bigotry and hatred, Evers's children appear to be very well-adjusted individuals. "My children turned out to be wonderfully strong and loving adults," Myrlie Evers concluded Ebony. "It has taken time to heal the wounds [from their father's assassination] and I'm not really sure all the wounds are healed. We still hurt, but we can talk about it now and cry about it openly with each other, and the bitterness and anger have gone."

At the same time, Mrs. Evers asserted in People that she hopes for Beckwith's conviction on the murder charges. (He was, indeed, convicted after the third trial.) "People have said, 'Let it go, it's been a long time. Why bring up all the pain and anger again?"' she explained. "But I can't let it go. It's not finished for me, my children or ... grandchildren. I walked side by side with Medgar in everything he did. This [new] trial is going the last mile of the way."

As a fitting tribute, Evers was interred at Arlington National Military Cemetery in Washington DC.