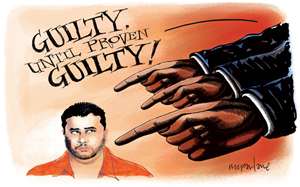 So it is, justice I mean, a Florida judge did the responsible thing by revoking bond for the assassin George Zimmerman, who is charged with second-degree murder in the death of Trayvon Martin. Seminole County Circuit Judge Kenneth Lester Jr. ordered Zimmerman to surrender to the county sheriff within 48 hours.

Most observer in the case or I should speak for myself believed Zimmerman misrepresented himself from the very beginning, particularly how much money he had when his bond was originally set in April when he claimed to be indigent. I will go further and say about everything!

The murderer according to the prosecution cited as evidence recorded telephone conversations that Zimmerman had with his wife prior to the hearing. The conversations were recorded while Zimmerman was being held in the Seminole County Jail after being charged with second-degree murder on April 11. Now, everyone knows when you call someone from jail or receive mail the jailers are listening or will read the correspondence.

This, in my mind, gives reason to question anything that Zimmerman has said throughout this ordeal. Is charged with fatally shooting Martin, 17, on February 26 while he walked in a Sanford, Florida, neighborhood where he was staying during a visit with his father. Zimmerman, 28, a neighborhood watch volunteer claimed he shot the teenager in self-defense.

The trial prosecutor stated accurately that "The defense, through Mrs. Zimmerman, lied to this court about the amount of money that they had… I don't know what words to use other than it was a blatant lie." Outside the courthouse, the lawyer for the family of Martin said Friday's decision is significant. "Judge Lester's finding that George Zimmerman was dishonest is very important because his credibility is the most important thing in this entire case," said Benjamin Crump.

"Remember, this is only George Zimmerman's testimony that says Trayvon Martin attacked him. All of the evidence suggests that George Zimmerman pursued and confronted Trayvon Martin. Therefore, that's why this is such an important ruling today." In court documents, State Attorney Angela B. Corey acknowledged she was making the strongly worded assertions in describing how Zimmerman's wife represented his finances.

Zimmerman's defense team stated during an April court hearing that Zimmerman's "family members misinformed the court (the state would use a much stronger and accurate word to describe what occurred -- defendant's wife lied to the court) about defendant and his family's finances," Corey wrote in court papers.

Prosecutors have informed federal authorities about Zimmerman's second passport in case he attempts to use it "to flee the country," Corey said. Regarding Zimmerman's finances, Corey alleged that recorded phone calls in April between Zimmerman, while he was in Seminole County Jail, and his wife showed that the couple "spoke in code to hide what they were doing" regarding more than $135,000 in a credit union account belonging to the couple.

The money was apparently donated by members of the public to Zimmerman's website that Zimmerman "fully controlled and participated in the transfer of money from the PayPal account to defendant and his wife's credit union accounts," Corey said in court records. "This occurred prior to the time defendant was arguing to the court that he was indigent and his wife had no money." But Corey stated in court documents Friday: "The money still belongs to defendant and he can demand it at any time."

The prosecutor said the judge "relied on false representations and statements" by Zimmerman and his wife when the court set his bond at $150,000. He was required to post only 10% of that. Corey argued that the court should revoke the bond or increase it "substantially." Lester appeared angry that the court had not been told about the money. "Does your client get to sit there like a potted palm and let you lead me down the primrose path?" he asked Zimmerman's lawyer. "That's the issue."

The facts for this writing are attributed to news reported by CNN. I wanted to make sure my readers around the world were informed and know that we stand for justice, we will not relent until justice is served. And that’s my Thought Provoking Perspective…

Visit msnbc.com for breaking news, world news, and news about the economy
Posted by Unknown at 12:49 AM