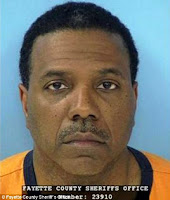 This Sunday morning I want to chime in on the latest Mega-Church pastor to fall short of the long arm of the law. To all the faithful, this time it none other than the flashy televangelist Creflo Dollar known for preaching that prosperity is good. To be fair with a name “Dollar” - I can agree with that! Nonetheless was arrested early Friday for allegedly roughing up his 15-year-old daughter at his Atlanta home. Hmmm.

Although this is not as bad as the Bishop, and I use that loosely, Eddie Long situation - somehow in my mind it begs the question – WTF? First of all, if Jesus where to come back today I am pretty sure he would do just as he did in the temple with the money changes. In my opinion, these leaders of huge flocks cannot effectively serve the community when they have the huge financial responsibility of such monstrosities. Frankly, it’s just business! Just sayin!

There is a very popular radio host who does a show from time to time called “Pimps in the Pulpit”. Let me be clear, I am not calling either of these Sheppard’s pimps but when you take from the needy to benefit the greedy. Well we have to find a word that more accurately describes the mission other than pastor. The larger question is who are the followers of these guys? Are they just sheep lead blindly?

Let’s recap! Last year there was a Mega-Church preacher from Florida who was found dead in New York (allegedly) of a drug overdose with drugs found on his person (allegedly). Both Long and Dollar were among six televangelists investigated by Iowa U.S. Senator Chuck Grassley from 2007 to 2010, following questions about personal use of church-owned airplanes, luxury homes and credit cards by mega church pastors and their families. I won’t even touch the Catholic Church and their problems.

I don’t believe these are isolated instances and I am not saying that every church falls into this kind of negative category. But I would suggest that if there tax status changed some of these issues would be remedied. I also want to say I am not just picking on African American pastors. There are just as many whites and others who are just as foul in their devotion to the all mighty dollar.

I am not going to spend too many words on the frailties of faith leaders. But with respect to the Dollar Man this was not his only brush with controversy. When former heavyweight boxing champion Evander Holyfield filed for divorce in 1999, Dollar refused to give a court-ordered statement in the case about how much money Holyfield had given to the church.

Janice Holyfield's lawyer said he had determined that Holyfield gave $403,000 to the church in 1998, and donated $3.9 million in the 60 days before the ex-champ filed for divorce in March 1999. Dollar's lawyer said he should not be required to testify because of the separation of church and state, pastor-parishioner privilege and several state and biblical laws. Really!

I am not challenging anyone’s faith – but believers we are or should be believing in the word of God and the teachings of Jesus! Not some jokers with private jets that you are paying for. I just want use a popular phrase that says “Game Knows Game” or you should. And that’s my Thought Provoking Perspective…