The Mothership is Lost!!! 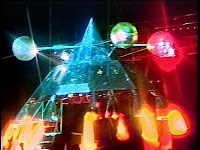 I opened the Washington Post newspaper this morning and on the front page I found an article by Staff Writer Chris Richards “The Mothership, lost in space”, adding that this is not just a story about a UFO or at least not just any UFO - but “The Mothership”. I am sure many of you, “Funk-a-teers”, are well aware of what I am talking about.

It is probably the most creative stage prop in the history of American music that belonged to funk legends Parliament-Funkadelic. The famed aluminum flying saucer launched in during the group’s heyday in the 70’s was about 20 feet in diameter and decked out with a fantastical display of dazzling lights.

It’s missing!!! Frankly, I was perplexed to see this story on the front page about where it was or that anyone was trying to find it, as if it was a real crime drama. Here are some of the facts: the Mothership was last spotted on stage in Detroit in 1981, belching dry ice fumes and flashing kaleidoscopic lights. Promoters brought it to the DC area “where it vanished in Prince George's County in 1982, rumors of its whereabouts have mutated into local lore. It burned in a fire. It was disassembled. It was stolen. Scrapped. Kidnapped. Thrown in the woods. Chained to a truck by a drug dealer and dragged to funk-knows-where. The band's most devoted followers say it flew off into space.” REALLY!!!

The reporter talked to people connected to the mystery, including George Clinton, front man for the group and the promoter, but all that was revealed was “it wasn't in Detroit. It was in a junkyard in Seat Pleasant and the promoter was the last person to see it because he threw the Mothership away, which Clinton thought that was pretty stupid". At this point in the story I began to wonder if maybe it’s time for the president to bring in the FBI, CIA, or maybe the military because this was beginning to sound like a national emergency.

Here is what was revealed: “It was the spring of 1982 and Parliament-Funkadelic frontman George Clinton and his bandmates were battling debt, drug addiction and each other. Brooks, who ran the group's Washington-based tour production company, says the only way he could pay the band's debts was to pawn its gear. With no place to store a spacecraft, he dumped the Mothership in a junkyard behind a Shell station ... But 28 years later, its final resting place remains a mystery.” Ok, I know you are making faces with puzzled looks or maybe a few laughs but this was on the front page of the Washington Post.

Here is the backdrop to the story: Throughout the 70’s, Clinton and his bandmates blurred the line between escapism and empowerment with a glut of albums that have been endlessly sampled, imitated and analyzed. Look at the decades of funk, rock, techno, go-go, Prince hits and jam bands that came in P-Funk's imaginative wake -- "influential" doesn't quite cut it. Maybe without Parliament-Funkadelic, Lady Gaga would not wear ridiculous outfits and hip-hop might not exist.

Onstage, the band was a living, breathing, panting comic book. Clinton in his stringy blond wigs, bassist Bootsy Collins in his star-shaped shades, Garry Shider in nothing but angel wings, combat boots and Pampers. "They were celebrating the intellectual breadth of the black experience and giving people a grand space to celebrate all that they had become," says California author and funk historian Rickey Vincent. "Sly Stone said, 'I Want to Take You Higher.' George Clinton said, 'Yeah, and I got the Mothership to take you there.' In a sense, he was doing what black folks had wanted to do for generations: Take themselves up."

Before the Mothership was built, it was a concept, says 68-year-old Clinton. Parliament released "Mothership Connection" in 1975, an album with a title track about hitchhiking to cosmic transcendence: "Swing down, sweet chariot. Stop and let me ride." Clinton started dreaming up a tour to match. After watching the Who's 1969 rock opera "Tommy," he asked himself: "How do you do a funk opera? What about [black people] in space?" The Mothership was assembled in Manhattan and made its first descent in New Orleans from the rafters of Municipal Auditorium on Oct. 27, 1976 and minds were blown.

Washingtonians greeted the Mothership with unparalleled fervor. The nation's capital had long been a stronghold for the band and in 1975, Parliament released the "Chocolate City" album, a supremely funky mash note that popularized the nickname Washington had earned for its majority-black population. Most people, actually nobody, had never seen anything like it. "Here's a guy coming out of a Mothership with a mink coat and platform shoes,… And a cane? And a fur hat? C'mon, man. Black folks been down so long. . . It was jubilation… The audience went crazy… the Mothership in all its glory.”

Going down with the ship. In the case of Parliament-Funkadelic, the ship went down with the band. "The volatility of the record industry at that time -- the disco crash, they called it -- made it really hard to subsidize that big touring group," says funk historian Vincent of the band's early-80’s collapse. "They ran out of juice and they ran out of money."

The band would later reform as the P-Funk All-Stars, and a second, less impressive Mothership would be built in the 90’s, but the group never eclipsed the highs of the late 70’s. Bernie Worrell rattles off the factors that dragged Parliament-Funkadelic down: "Discontent. Tired of all the unfairness. Being owed money. Lack of respect within the group. The management. Learning that money was stolen."

Some of Worrell's keyboards were sold to a young Trouble Funk, cementing P-Funk's role in go-go's creation myth. Too bad go-go didn't need a spaceship. Today, the group's feelings are mixed citing massive expenses racked up from touring with an extensive entourage, elaborate costumes and a gigantic metal spacecraft. "I was glad it was gone," he says. "With the Mothership came no money."

Thomas Stanley, an assistant professor at George Mason University claims that he's recently seen the wreckage of the Mothership -- touched it. Stanley is a true funk scholar and author of the book "George Clinton and P-Funk: An Oral History." He also penned articles for Uncut Funk, Mills's Parliament-Funkadelic fanzine. But he doesn't want to give up the location.

I find it much more satisfying to imagine this sacred artifact bound firmly in the bosom of the strong black communities that straddle the D.C. line. This was always the heart of P-Funk's base of support in Chocolate City," he writes. "It is very important, I think, that we not seek truth at expense of myth. Music and Myth are, after all, P-Funk's most enduring legacy." So is it really out there? Does it really matter? Perhaps there's no grand cosmic truth to be found in the wilds of Prince George's County. Just myth. But Stanley swears the Mothership is still out there -- rusted, rotted out and funkier than ever.

I found this article very interesting in that - for all the problems we face this was one of only six stories to make the front page – WOW!!! It was, however, an entertaining way to start the day. Maybe I would not be so sarcastic if there was a reward. Let me thank and give credit to the reporter, Chris Richards, because his article and detective work was the source of my writing.
Posted by Unknown at 4:46 PM