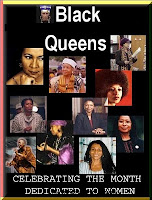 What an honor it is that someone thought to have a month to salute “Women” to which I concur and say thank you for and to the givers of life. It is during this month of celebrating women that I want to particularly show reverence to all of the beautiful Black women – all Queens. History tells us, and His-story agrees, that the oldest known human remains discovered is that of a black woman, whose name was “Lucy”, found in African over 4 million years ago. It is also a fact that Africa is the cradle of civilization, which means a black woman gave birth to mankind in a place called Pangaea.

These gorgeous creatures, proud, strong, baring the distinction of creating and continuing the species that was the first to walk the earth, caring for family, and carrying the world on her shoulders. She is God’s greatest creation. Therefore, I say it is an honor during this month that is dedicated to the “Celebration of Women” that I say - I LOVE YOU. This post is not meant to exclude women, who are also of distinction, from other ethnicities or hues because I love you too. Rather to express my profound appreciation for the wonders and wonderful Black Woman.

Some may say that today’s black woman, particularly young women, have lost their way. This is a subjective statement, which may be true to a degree but each of you ladies have the power to change that perception by guiding these young girls into womanhood. Because the nurturer in you knows that a real woman understands her strength and uses her power positively as a gift to mankind. I’ll say, the mantra so often used today “Strong Black Woman” is misguided because your strength is in unity, and I will leave that there as my prospective.

We can all remember, I hope, Big Mama who was the backbone of the family. This is the woman that I dedicate this article, and pay homage to those like her, for being the family’s greatest gift; a proud woman with wisdom, pride, and dedication with one purpose “family”. For all of those who use the mantra “Strong Black Woman” in a misguided way. Let me suggest that you use the First Lady, Michelle Obama our crowned queen, as an example for which to follow. As she portrays for the world to see what a black woman is - proud, graceful, supporting, dignified and charming - which is your strength.

Personally, my greatest heroine was Harriet Tubman because of her bravery and courage. It has been 97 years since her death, this week in fact, and I continue to be haunted by a powerful statement she made shortly before that fateful day. She was asked by a reporter if she knew how many slave she saved while conducting the Underground Railroad? She said, “I could have freed a lot more if they had only known they were slaves?” POWERFUL!!! I respect and honor her because she risked her life for the benefit of others traveling back to rescue many captive souls, 13 or more times, after she had escaped herself during a time that we cannot imagine today.

I want to also give special props to the actress/comedian Monique, for of course her Academy Award win, but more importantly for her staying true her roots. Regardless of what you think of the movie, her betrayal of characters, or her as a comedian – she is not sellout. If you are not aware, she did not do the Hollywood “forget where you came from” thing leading up to the award or after.

She supported those who supported her giving exclusive access to “Jet Magazine” and “Ebony”, for example. In addition, during a news conference where they, the mainstream reporters, traditionally get to ask all the questions, she began to call upon the African American reporters present. I was particularly proud of her because she said “you did not support me on my way here and these people did”. You go girl – that’s a strong black woman – much love.

There was a commercial a long time ago that said, “You’ve come a long way baby” or look at this way “from the outhouse to the White House”. These are just a few exceptional women that I am particularly proud of because of their integrity, pride, dignity, and fortitude, but there are so many more. So for those that came before you or walk amongst you; like Phyllis Wheatley, May Jemison, Mya Angelou, Oprah Winfrey, Madam CJ Walker, Sojourner Truth, the Queen of Sheba, Nefertiti, Big Mama, my Mom, you, and not to be left out the millions of heroines that the world have been blessed to share – you are loved…

JUST A SEASON
Book Trailer
Posted by Unknown at 3:10 PM