It Could Be A Long Hot Summer 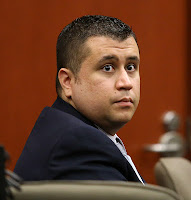 I wrote a post last week reminding my readers that the murder trial of George Zimmerman is finally upon us and to support the Martin family in their quest for justice. I was surprised by some of the comments and emails I received and yes, the pros and cons were split right along color lines. One guy commented that “we should pray for Zimmerman” the accused murder of this child. Another sent a message saying I was playing the race card.

I know there is freedom of speech and everyone has a right to their opinion. But most reasonable people would take umbrage to such remarks particularly in light of the defenses unethical behavior, in my view, to fabricate information about the dead child. As widely reported the defense produced what they called evidence in a brash attempt to alter the image of Martin by linking him to guns, drug use, and a propensity for violence.

The defense team, in prior press conferences and interviews, revealed images on Trayvon’s phone of him smoking marijuana and allegedly holding a gun. Being that they lied about these things should make everyone question their ethics and trustworthiness on any issue or evidence in this case. Particularly, when the court agreed that none of this is admissible.

The there were also statements made recently by Zimmerman’s brother about “voodoo forensics” is more evidence of their desperation. They want to discredit as much evidence in the public eye prior to trial regardless of foundation or truthfulness. Should we discount his statement as the man’s feeble attempt to help save his brother from prosecution of killing an unarmed teenage boy? YES!

Despite the posturing from the Zimmerman defense team and a defiant and nationally supported stance from the Martin family, the trial could play out in a variety of ways once jurors are presented with the mounds of evidence in the weeks ahead.

We have not come as far as we think and if history is any indication we might be in for a long hot summer as the Trayvon Martin murder trial proceeds to conclusion. And that’s my Thought Provoking Perspective…