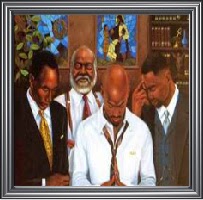 The subject of a black man doing anything positive very polarizing and controversial subject but it is a crucial piece of the African American Diaspora. This is unless you are a sellout, and we know who you are!!! I digress! I can speak to this issue because I was not unlike many African Americans whose been touched by the consequences or aftermath of living in America.
My father abandoned me in the womb while my teenage mother carried me. I did not meet this guy until I was ten and have only been in his presence for maybe two hours in my entire life. However, my grandfather was the man in my life who taught me how to be a man. His teachings resonate profoundly within my every waking moment, which I used to raise my son and teach my grandson to include sharing the same knowledge with others, as I navigate the troubled waters of life. The fact is “you have to see a man to be a man!”
We are a community in crisis. I do not cast blame but there is enough to go around. However, there are men who give of themselves to the benefit of others, raising their children, empowering the community, carry themselves with dignity and respect. It is my view that does not have to be your man but there has to be a man present in the lives of these children. If this were being done with vigor, it would have a ripple effect. The home would be held together; the community would be greater, there would be development in the minds of our youth, and maybe the carnage that is taking place would cease.
Images are and have been projected of black men falsely, most often, glorifying our role in society as thugs, gangstas, criminals, buffoons, clowns, being worthless, and hopeless have permeated far too long. I know that many of you know that is not the case by enlarge. However, when you open your newspaper or watch TV that’s how we are represented. I argue that this assassination of character should now be removed. If for no other reason than, the fact, the most powerful man in the world today looks like us, an African American. Adding to this, he leads a proud, dignified family that is positively on display for the whole world to bear witness to, which says all things are possible.
The absence of the strong, responsible black man holding it down, in the family and community, is destroying us as a people. Having said that, the purpose we live is to continue the species. I was taught a very significant lesson early in life, and reinforced every day of my life, by my Grandfather who said, “I raised you to be a man and as a man you don’t know what you might have to do but when the time comes you do it." We don’t know what challenges are ahead of us. Therefore, my interpretation of that daily message was preparation plus opportunity equals SUCCESS and that the difference between a man and a boy is the lessons he learns.
These platitudes are essential to the survival of our children and, frankly, our existence. There needs to be a man in the lives of these boys, and girls, because the father’s role is to be an example, a role model, to guide, direct, and pass on the wisdom he’s gained. For example, how can you expect your little girl to chose a man if she has no model to base a relationship on?
In addition, ladies, please stop thinking that can make your boy a man – you can’t. You can raise, teach and nurture him – but you cannot make him a man because you are not one. Now, to the ladies that are holding it down, I applaud you, I know what that enormous job is like – my mother did it, and I was no walk in the park. If it had not been for Granddaddy, I would be lost – dead or in jail.
I have formed a Facebook group BLACK EMPOWERED MEN  where you are personally invited to join and contribute wisdom to the benefit of others. ALL ARE WELCOME! The purpose of this group is to be a vehicle to communicate with those who agree and can offer feedback, suggestions, ideas, and information meaningful information and knowledge. If not for you, do it for the children. Stand Up Black Men –Reach one Teach one! And that’s my thought provoking perspective…