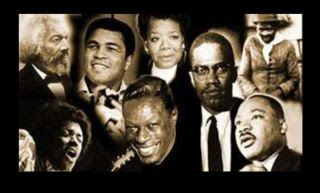 I've written a series of articles via this blog specifically designed to be a potent source of empowering knowledge for the enhancement of the community and the minds of mankind. During Black History Month I will post the entire series with a different article each day speaking to the phenomenal history and difficult struggle of the African American experience. You will come to realize that our story is the “Greatest Story Ever Told!!!

The legacy of dependency, apathy, and entrenchment of the American social order from the beginning provides clear evidence of those with a diabolical intent to bankrupt the souls of African Americans based on an ideology of supremacy. These stolen souls that exist today are people who bear the burden of a system that perpetrated, in the name of God, the greatest crime known to man. Hence, from the beginning, people of African descent were intended to be a nation of people living within a nation without a nationality.

I will call the writings this month “The Unspoken Truth”. It is intended to empower by educating people through knowledge concerning issues that many blacks continue to face today from the untreated wounds of America’s forefathers. This series is a knowledge-based examination of the African American Diaspora. As you travel with me though the next twenty-eight days, my purpose is to simply offer explanations causing people to look at and understand the root cause of the asymptomatic behaviors.

It is my sincere desire to help people understand that there is a conditioning in “certain” communities – this is not an excuse, rather an explanation as to why these behaviors were never unlearned and have been passed down from generation to generation. Over my relatively short lifetime, I have been referred to as Colored, Negro, Afro-American, Black, and an African American, which were the polite terms assigned to make known that African Americans were not American citizens.

The concept of African Americans being slaves, physically or mentally, is as old as the nation itself, designed to deprive a people of its culture and knowledge through sustained policies of control. To overcome these indignities we must realize that education is the single most important ingredient necessary to neutralize the forces that breed poverty and despair. Regardless of how much we are held down, it is our responsibility to find a way to get up, even if the system is designed to protect the system.

As you follow the Unspoken Truth this month and we embark upon this journey; know that learning without thought is a labor lost; thought without learning is intellectual death; and courage is knowing what’s needed and doing it. As tenacious beings, we must understand that there is no such thing as an inferior mind. So I say it’s time for an awakening, if for no other reason than to honor those who sacrificed so much in order that we could live life in abundance.

As you experience Black History Month remember this: You only have a minute. Sixty seconds in it. Didn't chose it, can't refuse it, it’s up to you to use it. It's just a tiny little minute but an eternity in it. You can change the world but first you must change your mind. And that is my THOUGHT PROVOKING PERSPECTIVE!

Purchase “Just a Season” today because Legacy – A New Season the sequel is coming!
AMAZON