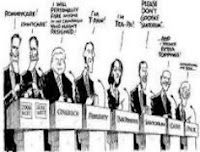 I have become enthralled with this year’s Republican cast of characters. It might be more accurately stated as circus or sideshows. After the last debate I asked myself; has it come to this? I’ve been trying to recall when the mentality or the lack thereof represented on the debate stage was, if ever, more comedic. I have lived long enough to have seen many things, and frankly this group takes the cake.

I really thought I’d seen the worst during the last presidential campaign with the War Hero and Caribou Barbie. Remember them, one could see the future and the other could see Russia from her house. The only way I can describe this current group of fools is to compare their insanity to it being on steroids.

I have really enjoyed the debates because they have been ridiculously hilarious. In the last one I got the biggest laugh from the presumed frontrunners. These people want us to believe they are ready to be the leader of the free world. Hmmm! I’ll start with the guy who had a mortifying episode of brain-lock during the debate and of course I will talk about his opponents who somehow managed to remember their lines but honestly didn’t do any better making sense.

Let’s say Mr. Perry’s Meltdown was a human episode. Ok, I’ll admit I am compassionate and understanding but really with his political background, do we really want this guy to have the black box with his finger on the button. I don’t! This plus the “N word Lodge” thing gives me reason to suggest perhaps he should head back to Austin. It was embarrassing for me to watch. So I know it was embarrassing for him and frankly, his plunging poll numbers suggest that he has little chance of winning the nomination; and by the way, um, let’s see, wait a minute, it’ll come to me. . . . Oh, I forgot; um, um.

He tried for 43 humiliating seconds, which is an eternity when you’re in front of a television camera, before finally giving up. Now, it was not like he was trying to remember the formula for dichotomizing the atom. He was merely trying to remember the three federal agencies he would eliminate if he became president. He named the Commerce Department and the Education Department — then blanked on the third. WOW! To his credit he did remember it about 15 minutes later, at his next opportunity to speak - the Energy Department. But the damage had been done.

I myself just had a momentary mental lapse, a couple of paragraphs back, but on national TV when he should have been prepared. Shocking! Now, its one thing to misstep when the list is 10, 15 or maybe 20 items - but three? If you look back at his other performances in previous debates they were not much better, which begs the questions about his intellectual depth, not to mention basic grammar.

Ok, time to move on. Next there was the one they, meaning Republicans, call “Him” - Mitt Romney. Most talking heads seemed to think that “Him” was the winner by default. Romney has mastered the art of surviving these multi-candidate encounters: Speak fluidly and with conviction, secure in the knowledge that with so many others on the stage and so little time for each question, there’s hardly any danger of being caught in any of his obvious contradictions, flip-flops and non sequiturs. Actually with “Him”, there is just a noun a verb and Obama.

Then there was Newt! He is, by some, considered the intellectual of the cast as he often remind us that he once was a professor of history and a historian. I recall reading somewhere that his PhD thesis at Tulane University was titled “Belgian Education Policy in the Congo: 1945-1960.” If you don’t know that’s about the history of colonial Africa, which might be a sign of the times if he were to get the job as president. Michele Bachmann, Rick Santorum, Jon Huntsman, and Ron Paul were merely present and accounted for or maybe props would be more fitting.

Last but not least is the star of the circus or the GOP’s token shade of color; the pizza man - Herman Cain. With all the alleged sexual harassment claims coming from so many white women he had the nerve to refer to House Minority Leader Nancy Pelosi as “Princess Nancy.” I know he has spent the past week trying to convince the nation he’s not guilty of chronically self-indulgent behavior toward women. Belittling the first woman to become speaker of the House with a flip, sexist insult was appalling.

Well this is my view of the debacle that was the last sideshow they called a debate. If you don’t know, I am a huge boxing fan and at the end of each boxing match the referee will raise the hand of the victorious fighter. Let’s say they would do this for the fight to be the next president of America. It would sound like this: “The winner and still president of the United States – Barack Obama!”

And that’s my THOUGHT PROVOKING PERSPECTIVE!