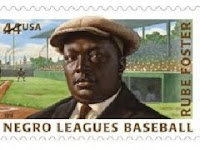 The Negro League is set to take the baseball field again, only this time via a stamp, on Thursday the Postal Service will honor the organization that gave black players a chance to show their talents before the major leagues were integrated, or as I would rather say - while it was segregated. A pair of 44-cent commemorative stamps will be dedicated in ceremonies at the Negro Leagues Baseball Museum in Kansas City, Missouri.

Let me be clear, I am proud of the honor that is being bestowed upon the league and such legendary Negro stars that played from 1920 to 1960; such as Satchel Paige, Josh Gibson, James "Cool Papa" Bell, Willie Mays, Hank Aaron, Ernie Banks and Jackie Robinson, who is credited with breaking the color barrier in Major League Baseball in 1947.

This is where I have a problem – “Breaking the Color Barrier”. Could it be that this is a polite or a sanitized way of disguising the wretchedness imposed upon a race of people as a result of the Plessey Supreme Court decision that made segregation the law of the land for more than fifty years? This decision was so wretched that Blacks were not allowed to drink from the same water fountain or use the same toilet facilities let alone play a game, and let’s be clear baseball is a game or should I say a business. This is simply what this event was about – business.

Again, I want to be clear that I take nothing away for Mr. Robinson or any of the greats because they were GREAT, which was why they were marketable from a business standpoint. To prove my point, when was the last time you saw a baseball player successfully steal home in a game, something that Mr. Robinson was able to do and did regularly? I will close by paying homage to the greatest man to be part of the Negro Leagues, its founder Andrew "Rube" Foster whose vision has become little more than a footnote to the Leagues history.

THE JOHN T. WILLS CHRONICLES
Just a Season
Posted by Unknown at 2:07 PM