The Lion – Rest in Peace 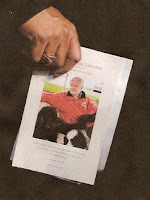 An obituary is a published notice of a death with a brief biography of the deceased that reflects a life lived. The person who has made the transition has over the course of their journey already written a eulogy for the remembrance of their spirit, which is their legacy. Therefore, I will call this an appreciation for the life of Senator Edward Moore "Ted" Kennedy.

I want to take this opportunity to personally offer my deepest sympathy to the Kennedy family for the loss of this great man known as “the Lion of the Senate” - who will be sorely be missed. Senator Kennedy, like all who came before and who will come after him, will have placed on his final marker a name, a beginning date, a dash, and an end date.

The “Dash” placed between the dates is profoundly significant because it represents the whole of a person’s life. I will not try to find words to express the Senator’s life nor expound upon his accomplishments. Rather, I will use Senator Kennedy’s own words, “…to be remembered simply as a good and decent man, who saw wrong and tried to right it, saw suffering, and tried to heal it, saw war and tried to stop it.”

Senator Kennedy once said of his late brother, which is fittingly appropriate for him. “Those… who loved him and who take him to his rest today, pray that what he was to us and what he wished for others will someday come to pass for all the world. As he said many times, in many parts of this nation, to those he touched and who sought to touch him… Some men see things as they are and say why. I dream things that never were and say why not.”

As words of praise continue to come from all quarters; locally, nationally, and from around the world full of resounding testaments to his character and appreciation for his dedication to service. I will just offer a simple summary of what needs no summary by using a quote from our president, “virtually every major piece of legislation to advance civil rights, health, and the economic wellbeing of the American people bore his name or resulted from his efforts.”

With great respect, I would be hard pressed to identify another person or another family that has had more sway affecting unprecedented change upon the lives of so many people, particularly African American’s, and for generations to come. Senator Kennedy bore the burden of a legacy. A man born into privilege and wealth not required to give unto others but chose to do uncommon things in a common manner to benefit people and changed the world.

His life, though full and significant, will be held in highest regard for the "Dash" is his legacy to the world, which I can appreciate and was blessed to have shared the byproducts of his work. His legacy, like any other person, will be judged by the work he’s done. Senator Kennedy, you belong to the ages now and have joined your legendary brothers, sister, and family members who, I am sure, will welcome you with open arms and say, “Well Done”.

“Hope shall live and the dream shall never die.”